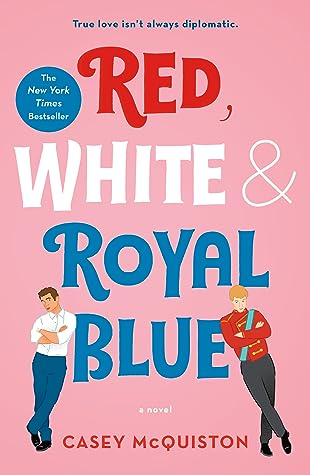 First Son Alex Claremont-Diaz is the closest thing to a prince this side of the Atlantic. With his intrepid sister and the Veep’s genius granddaughter, they’re the White House Trio, a beautiful millennial marketing strategy for his mother, President Ellen Claremont. International socialite duties do have downsides—namely, when photos of a confrontation with his longtime nemesis Prince Henry at a royal wedding leak to the tabloids and threaten American/British relations.

The plan for damage control: staging a fake friendship between the First Son and the Prince. Alex is busy enough handling his mother’s bloodthirsty opponents and his own political ambitions without an uptight royal slowing him down. But beneath Henry’s Prince Charming veneer, there’s a soft-hearted eccentric with a dry sense of humor and more than one ghost haunting him.

As President Claremont kicks off her reelection bid, Alex finds himself hurtling into a secret relationship with Henry that could derail the campaign and upend two nations. And Henry throws everything into question for Alex, an impulsive, charming guy who thought he knew everything: What is worth the sacrifice? How do you do all the good you can do? And, most importantly, how will history remember you?

This book has become the most hyped book out there in 2019. Seriously. Everywhere you look, this adorable little cover has been springing up like the weeds in the backyard when you’re trying to take a bookstagram pic. And it’s had the major love to go with it – EVERYONE reading it has loved it – except for maybe the occasional 3 crown rating.

I, of course, felt the desperate need to read it, because I mean, I love disappointing myself. I mean, who doesn’t love to somehow manage to not enjoy every single hyped book she reads because she is forever a book hipster? *crawls into hole* And I’m not going to lie, I saw a compelling 3 crown read before reading it, and figured that was gonna be my life.

BUT EVERYONEEEEEEEEEEEE. It totally lived up to the hypeeeeeeeeeeeee. Omfg, I can’t even begin to explain. I was in so so deep with this book. I needed to get back to it every time I set it down; I instantly bought it after I read it (I had gotten from the library); and I literally felt like I was drowning in feels. Henry and Alex will easily go down as my favorite ship this year – unless Cresswell magically appears.

Where to even begin? The romance. Let’s start with my favorite part. Henry and Alex had a ridiculously amount of chemistry. From the beginning angry tension turning into sexual tension to when they were an actual couple – they legit had it allllllllllllll of the chemistry. They were wonderful together. Between reading how they interacted in the moments in the book when they were together to their compelling emails, I lived for the moments when they were back together. Some of the other side plots couldn’t live up to the romance, because you not only got to see them grow as a couple but individuals.

There was an amazing cast of characters as well. Alex and Henry were absolutely wonderful and dynamic characters. They both grow so much throughout the story, and by the end, they are stronger, more amazing characters who understand what it means to be true to themselves. I loved reading Alex’s journey since he goes through so much with his sexuality and what he wants to do in life. He felt so real with his little quirks and reactions, and Henry is just a precious little gem that I loved so much. The other background characters were just as fantastic, and June was a favorite side character.

The plot was pretty fascinating. There are a bunch of loose plots that are kind of just swirling together behind the romance, which was the center stage. Some plots I could have skipped, but some of them helped move the story along and allowed our main dashing duo to grow from and find themselves. It did ended up working together to create the book, and despite not a major enjoyment of all of the plots that were very politics-based, the story moves so quickly and easily that you’re back to enjoyment without really having have left.

The writing, at times, was my biggest spot of issue. By the end, I really think that it leveled out and was absolutely perfect. However, in the beginning, it felt like it was a lot more telling than showing, and I didn’t get the exact vibes from it. But it did end up working altogether, and I forgot my misgivings when I was knee-deep in my ocean of feels for this novel.

Everything just worked super good. I have now run out of words because despite the little issues that I mentioned, it was JUST SO GOOD. I was literally sad when I realized the next day after I finished reading that I couldn’t read it. Just so many feels – it totally awoken my frosty heart who was afraid the princess of feels and swoons time was done.

rating: Rapunzel because THAT ROMANCEEEEEEEEE I AM SCREAMING
representation: m/m romance; gay MC; bi main character; bi side character; Latino MC; questioning rep; trans side character
content warnings: being outed publicly; since this is NA, there is a good amount of sexual content