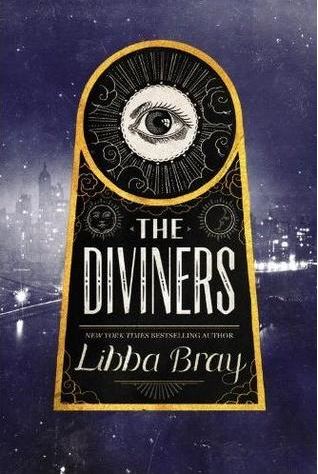 SOMETHING DARK AND EVIL HAS AWAKENED. . . .
Evie O’Neill has been exiled from her boring old hometown and shipped off to the bustling streets of New York City—and she is pos-i-tute-ly ecstatic. It’s 1926, and New York is filled with speakeasies, Ziegfeld girls, and rakish pickpockets. The only catch is that she has to live with her uncle Will and his unhealthy obsession with the occult.

Evie worries her uncle will discover her darkest secret: a supernatural power that has only brought her trouble so far. But when the police find a murdered girl branded with a cryptic symbol and Will is called to the scene, Evie realizes her gift could help catch a serial killer.

As Evie jumps headlong into a dance with a murderer, other stories unfold in the city that never sleeps. A young man named Memphis is caught between two worlds. A chorus girl named Theta is running from her past. A student named Jericho is hiding a shocking secret. And unknown to all, something dark and evil has awakened. . . .

My second favorite of 2018 has finally arrived….9 months into the year, but I mean, we should be glad for small miracles????

There was just something about this book. I’m not entirely sure what it was, but this book is, like, 300 years along, and I was SO invested in every second of it. This totally is unheard of for this book princess, and I think it was a variety of things that combined to make it a fantastic read that was honestly the best book to read for this Spooky September readathon. Shall we count the ways??

– the setting, the setting, the setting. I’ve recently discovered I have A Thing for 1920s ghost mysteries??? I love me some books that take me back to the days of the 1920s apparently and then give me some ghosties??? Omg, I set. And this book set me good. It had a chilling atmosphere mixed with the roaring 20s NYC. While I was never fully creeped out or felt the ghostie panic, it does have an unsettling feeling and you feel like a chilly autumn night with a breeze blowing fallen leaves with the gray sky the entire time. So, basically, mood for life.

– the cast of characters. Okay, they’re super flawed and I didn’t love a lot of certain people’s decisions (hello, Miss Evie), but they were captivating and interesting. I understood their motivations and I got their characterization. While I wasn’t super invested in just one character, I was invested in all of them and I honestly didn’t mind jumping around because I knew there was going to be intriguing things happening in each of their storylines. There was also a fantastic amount of diversity in them too.

– so. much. ghost. action. SO MUCH. And it was creepyyyyyyy without ever being super scary, but CREEPY.

– the little amounts of romance was nice. Romance is not key to the story, but there were cute ships that did pop up every once in a while.

– the mystery. I was in deep with it. Even though I knew where things would eventually lead, it was still super intriguing and interesting. I love the little twists and turns it took, and it was just captivating.

– the writing was pretty good. I think the 20s lingo was a little too much sometimes, but Bray really did pack a lot of information into this story but it never felt like too much. I honestly have no clue how I tackled a 15 – 17 hour audiobook so fast I did other than Bray completely captivated with this.

There really weren’t too many cons from the little things that I said. It was such a captivating book, and the atmosphere/mood/setting just made everythinggggggg about this book. The mystery, the plot, and the characters were just as fascinating, and I’m so so so glad that I took a gamble on this one. 5 crowns, and an Aurora rating!

What do you think? What are some of your favorites of 2018? Do you love a good 1920s ghostie setting or am I alone in this?? Let’s discuss in the comments below!

29 thoughts on “The Diviners by Libba Bray”