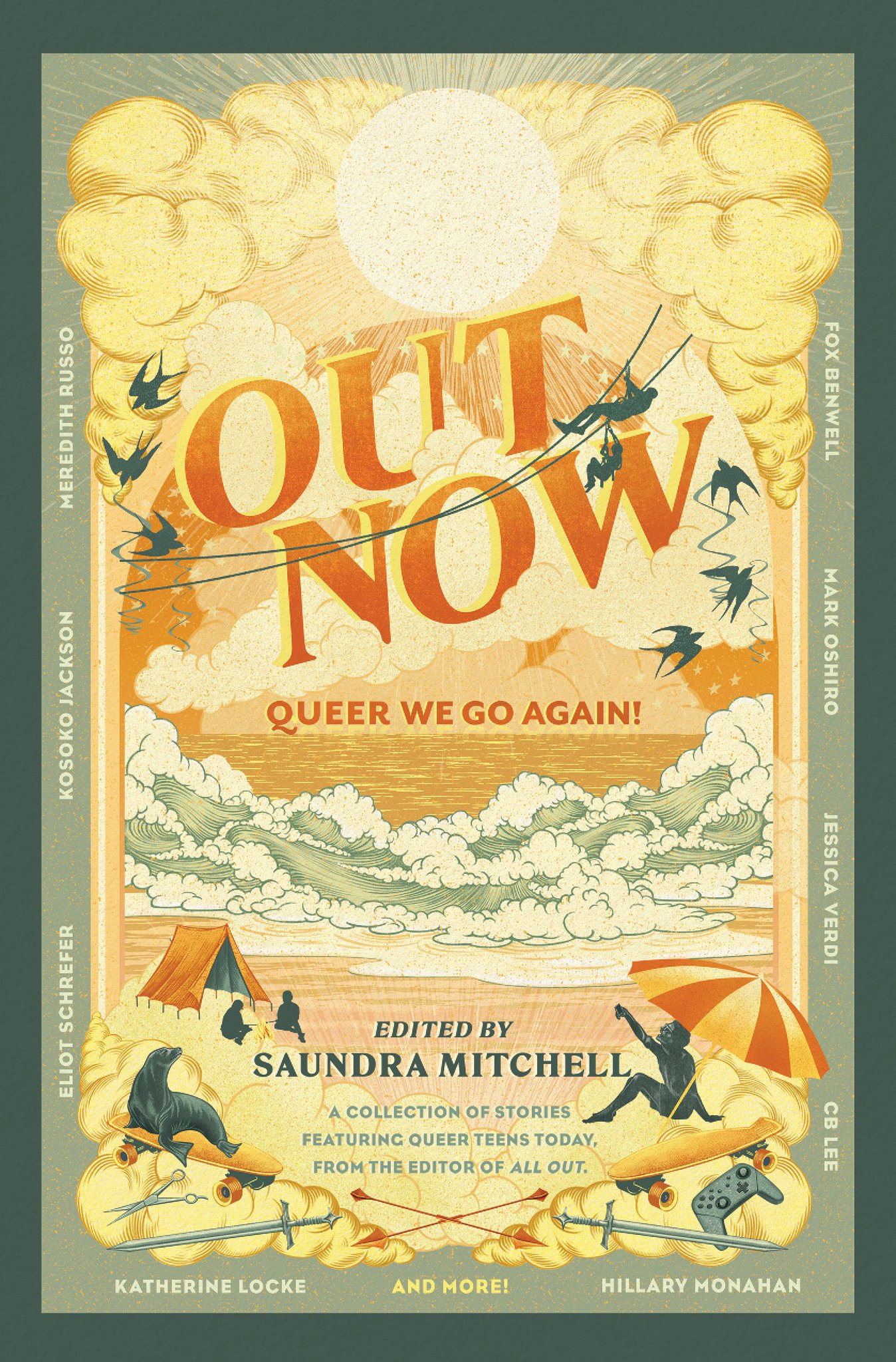 A follow-up to the critically acclaimed All Out anthology, Out Now features seventeen new short stories from amazing queer YA authors. Vampires crash prom…aliens run from the government…a president’s daughter comes into her own…a true romantic tries to soften the heart of a cynical social media influencer…a selkie and the sea call out to a lost soul. Teapots and barbershops…skateboards and VW vans…Street Fighter and Ares’s sword: Out Now has a story for every reader and surprises with each turn of the page!

This essential and beautifully written modern-day collection features an intersectional and inclusive slate of authors and stories.

Disclaimer: I received this ARC courtesy of Inkyard Press. I am grateful for the opportunity to review an ARC for my readers, but this will not influence my final rating. All opinions expressed in this review are my own and based solely on the book.

Allow me to preface this by saying I had a big ol’ discussion (read: sparking hot debate) with my co-blogger on how she should stop accepting blog tour invites simply because the cover is pretty. Then almost the next day I received an invitation from Inkyard Press to read & review Out Now and look, did you see that synopsis?

It was worth losing the argument with my co-blogger. Very, very worth it.

rep: questioning | until now I didn’t realize “questioning” could also apply to those unsure about the label they wanted to choose, so i’m glad i learned that through this story. i wasn’t a fan of the second person POV. there was so much skateboard terminology that i was a bit overwhelmed. the ending left me with a “that’s it?” feeling.

What Happens in the Closet
Caleb Roehrig

rep: gay male, closeted mlm | i was hooked from the start, how have i not read a Roehrig book before now? thank you for fulfilling my need for ~gay~ vampires (cannot wait for his full vampire novel The Fell of Dark !) and sassy teens. i really hope Lucas sticks to his word because i like this couple.

rep: gay male, questioning/closeted mlm | i felt for Ricky in this one. i don’t think this is an uncommon experience for LGBTQ+ youth, and Ricky’s hopefulness mixed with his stated distrust for relationships can be relatable. the formatting of the short story was very cool, based on his love of video games.

Lumber Me Mine
CB Lee

rep: wlw, ace | i was so here for Jasmine’s journey into independence following an emotionally manipulative relationship. i love you, Jasmine!! (still don’t get the title, tho.) her tentative start into a new relationship was beautifully written.

rep: bi, gay | that was so cuuute!! i adored everything, from the writing, to the dialogue between the characters, to the plot (i never would have imagined a story line like that). i had a huge corny smile on my face at the end.

rep: plus-size mlm, latinx mlm | i spent half my read in a state of intense nerves for Rodrigo. and then he met his online crush!! and then the thing happened! and then i was feeling all the other emotions! Oshiro, you hooked all my feelings in with this one.

rep: mlm | this one was cute and had a welcoming coming out moment. i loved the immediate support Luke got from his father. a lot did happen in a short time in this story, to the point that i felt kind of winded when i finished.

A Road of One’s Own
Kate Hart

rep: pansexual indigenous, questioning | i struggled a bit with this one. right at the start, we’re introduced to Eliza and her three friends as they drive to pick up a fourth person for a camping trip. i got lost with the names, the personalities, the locations that were thrown in. i liked the open discussions on indigenous identity and history, but the romance wasn’t a big win for me since i never connected strongly with the characters.

rep: questioning | i was in love with Rory from the first page. this story had very painful moments as Rory questioned the labels they felt comfortable using. tw for depression.

rep: bisexual | this was so good! i was hooked from the first line. no more words, just I Need MORE!

rep: wlw autistic | boteju’s writing is so poetic. i could read it for hours and just ~drift~. this is a character-centric piece where not a lot physically happens but i truly fell in love with Shanti.

rep: wlw | this story had a dull ache to it that i felt throughout my reading. there was an element of magical realism. i enjoyed Rey’s frank discussions with Kimber, for the “pull up your bootstraps” kind of talk that it was.

A Pound of Flesh
Kosoko Jackson

rep: Black mlm | past lives, Greek gods? yes please! sadly i was confused throughout this story. there was too little background on why Carson was being reincarnated or why he kept dying early. i couldn’t quite make the ties between the Greek gods’ presence and the riots going on.

One Spell Too Many
Tara Sim

rep: taiwanese bi, trans male | okay how have i never read a book about witches that run a bakery. tara sim i am PLEADING make this concept a whole book. and if you keep anna and noah as the characters you better bet i will be screeching about this for years. i adored this to the moon and back.

rep: mlm | aliens! this was a fun read although i wish the story had been told in real time and not as a flash back that is my only critique. wade and river are so great and also if *this* was a book… i mean.

rep: trans | i had some trouble following this story. i plan to come back to it another time. there were just some statements that made me go “?” and i need a focused brain to really go through it all. also as a cis person i’m not exactly the person to speak on it.

Once Upon a Seastorm
Fox Benwell

rep: trans male | there was a lot of abstract writing, almost magical realism, used at the beginning of this story. part of me liked it and another part of me got confused because i didn’t know if Theo was actually trans or a selkie. OBVIOUSLY HE IS TRANS, but i spent the beginning thinking oh, maybe he is a selkie, so by the end of the story i needed to readjust my thinking which might be the authors’ point (since Theo is confused about his identity) but i think this might need a re-read to digest.

rating: this book was so close to perfect | not every story in this collection was hit, but those that were will stick with me for a long time. i’ve also found a lot of new authors to follow and hunt down their every book.
representation: *taylor swift voice* “are you ready for it?” questioning, gay, lesbian, closeted mlm, plus-size mlm, latinx mlm, pansexual, indigenous, nonbinary, bisexual, wlw, Black, Taiwanese, trans male
content warnings: depression, sexual activity, violence, drug use, profanity

Saundra Mitchell has been a phone psychic, a car salesperson, a denture deliverer and a layout waxer. She’s dodged trains, endured basic training and hitchhiked from Montana to California. She teaches herself languages, raises children and makes paper for fun. She is the author of Shadowed Summer and The Vespertine series, the upcoming novelization of The Prom musical, and the editor of Defy the Dark. She always picks truth; dare is too easy. Visit her online at http://www.saundramitchell.com.

5 thoughts on “BLOG TOUR: Out Now (Queer We Go Again!) by Saundra Mitchell should be on all your bookshelves”