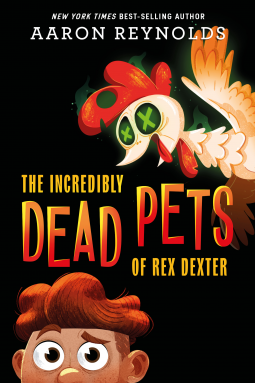 Rex Dexter is itching to have a dog. He was practically born to have one. His name is Rex, for crying out loud. It’s a dog’s name. Any pooch is preferable, but a chocolate Labrador is the pinnacle. The best of the best. The dream of all dreams.

When Rex’s B-Day for Me-Day finally arrives, his parents surprise him with a box. A box with holes. A box with holes and adorable scratchy noises coming from inside. Could it be? Yes! It has to be! A . . . a . . .

One hour and fourteen minutes later, the chicken is dead (by a steamroller), Rex is cursed (by the Grim Reaper), and wild animals are haunting Rex’s room (hounding him for answers). Even his best friend Darvish is not going to believe this, and that kid believes everything.

Rex’s uninvited ghostly guests are a chatty, messy bunch. And they need Rex to solve their mysterious deadly departures from the Middling Falls Zoo before it happens again.

Disclaimer: I received this ARC courtesy of Couchfest from Little Brown for Young Readers. I am grateful for the opportunity to review an ARC for my readers, but this will not influence my final rating. All opinions expressed in this review are my own and based solely on the book.

It’s been a while since I went on a rant – I’m trying out a new positive, lightful Mandy that brings the cheer – but I had to unleash myself for this one. Again, these are just what I thought and how I reacted when reading this novel, which I thought severely lacked in bringing proper seriousness and compassion to subject material that included murdered animal and animal abuse.

The writing was close to being a winner, but it definitely had a fatal flaw. The writing had the making of a lot of great humor middle grade novels. There was a decent amount of wit to it. There was a lot of lines – while nothing ever made me laugh out loud – it was clever, and I could appreciate. However, to me, the story was so concerned with the humor and making this book funny that it never brought an emotional connection.

And that was one of the biggest issues that I had with the book – there was no emotional connection. The subject matter is something that should be treated with a lot of sensitivity and should be bringing a major emotional connection. It’s a story about murdered animals, and yet, the story never pauses for a second to have one single emotional moment. In one breath, we’re introduced to graphically murdered animals and instead of taking a second to mourn their breaths, we’re throwing in another funny comment. I love a good humor novel; however, I was overloaded. I wanted to breathe, but I was thrown more and more humor that never stopped.

This is a very short novel, and at times, it would go pretty fast. However, at times, it did feel surprisingly long? I’m not sure if I just got tired from the above issue, but it did move pretty swift. I finally managed to recreate the full binge in one read moment that I’ve only ever done once before!!

When I first saw this book, I got excited because GHOSTS. And middle grade!! And then GHOST PETS. However, as I got more and more into the book, I struggled to really fully comprehend the entire subject matter that was being presented. I guess when I walked into the novel, I had thought maybe it was ghost pets that had died long ago – however, the subject matter turned a lot darker than that.

Our story follows Rex Dexter, and all he wants is a dog. However, on his birthday, his parents decide to give him a chicken instead. When he luck runs out in a game, he is cursed to see undead animals. As he sees more and more, he discovers that zoo animals are being murdered, and it’s up to him to save the day and uncover who is behind it.

I guess for me, the more I dug deeper into the story, the more concerned I was with the subject material. I mean, animals are being murdered. When I was the middle grade age range, I was banned from playing the Sims because one of my Sims died in a fire and I had a full existential crisis, couldn’t sleep at all, and had nightmares. I couldn’t even read a ghost story, since I did once and had to sleep with the lights on and The Temptations going at full blast. Reading about animals being murdered continuously is horrifying – especially to someone that thought it might be drawn in by their love of pets.

This is dark, and it’s certainly not treated as such especially with the increasing graphic murders of the pets. I had a hard time reading about it (so things that made me sick to my stomach), and I’m worried about what it would do to the middle grade reader’s psyche. Everything is treated in a cavalier manner as well, which really got me frustrated. These aren’t things to be made light of, yet we are never given a true discussion and focus on just how terrible any of the loss of life is.

It was fast paced, and there is a lot of action in. Things popped up a lot, and the rationale at the end of the novel didn’t even make that much sense to me.

Ugh, the characters. I was not a fan of Rex Dexter. I think I would have been had I had a chance to connect with him. However, we were so focused on the humor and moving the plot along that any chance I had a second to find myself  connecting with him, I got another witty comment. He is an irresponsible friend and especially pet owner. Some may say it might be because of age, but I’ve read a lot more mature and complicated kids and characters in this age range. I had so many issues with a lot of the decisions that he made.

⚠️ WARNING FOR ANIMAL ABUSE TRIGGER ⚠️We start off with Dex getting a chicken for his birthday. He decides that he needs to get chicken pet supplies, and he wants to take the chicken to the store, since that’s what other pet owners get to do. However, he doesn’t have a leash, which he would pick up at the pet store. He decides to improvise with a piece of rope. The chicken panics when he sees it coming around its throat. Rex doesn’t care at all and forces it around his throat. After, the chicken is still uneasy with this, so he doesn’t want to move. Instead of realizing this is a horrible mistake, Rex drags the chicken on the leash to the pet supply store. I was horrified by this. This is animal abuse, and neither of our young heroes of the story see any problem with this. It’s turned into another joke.

While at the store, Dex and his friend find this game that they decide to play – which enacts the curse that allows him to see the dead pets. However, while he is playing that, he loses track of his pet chicken, which gets run over by a steamroller. Right after this, instead of mourning the loss of his pet or animal life period, he complains about how his parents will never let him have a dog now. He makes about 3 comments about how he’s sad, but he moves on so quickly. Sure, you can make a comment about lacking in emotional maturity for the age range, but I was certainly more than enough mature to realize that an animal’s life is something to not be disregarded as Rex does.

⚠️ END WARNING FOR ANIMAL ABUSE TRIGGER ⚠️ He doesn’t handle the murdered animals with any more regard and maturity either. It’s horrifying the lack of emotion he shows with the animals. He even jokingly nicknames a burned rhino, “Tater Tot.” Yes, he does actively goes to find who is murdering them, but there is no real passion or injustice than a few odd comments here or there. With how much we don’t see or hear, I’m super concerned with young readers looking to him as a hero.

The other side characters were okay, but to me, I wanted more from them. The animals brought a little bit of that middle grade whimsy, but there was no standout character that I enjoyed.

I definitely struggled with this one. It had some promise with the writing, but in between the dark subject matter and more, I found this story to be more than lacking. I sadly can’t recommend this one for middle grade audiences.

2 thoughts on “[MG] ARC REVIEW: The Incredibly Dead Pets of Rex Dexter by Aaron Reynolds 💭 A Rant of Petly Proportions”