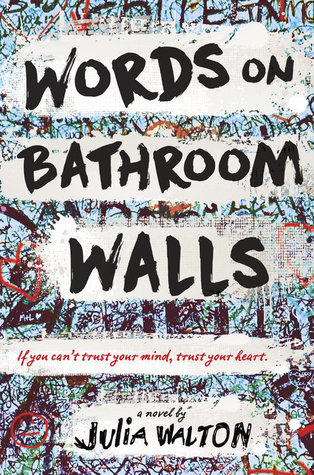 Adam has just been diagnosed with schizophrenia. He sees and hears people who aren’t there: Rebecca, a beautiful girl who understands him; the Mob Boss, who harasses him; and Jason, the naked guy who’s unfailingly polite. It should be easy to separate the real from the not real, but Adam can’t.

Still, there’s hope. As Adam starts fresh at a new school, he begins a drug trial that helps him ignore his visions. Suddenly everything seems possible, even love. When he meets Maya, a fiercely intelligent girl, he desperately wants to be the great guy that she thinks he is. But then the miracle drug begins to fail, and Adam will do anything to keep Maya from discovering his secret.

i am in tears, i was broken and then i was glued back together but handle me carefully because i am now fragile. what have you done to me Adam???

i need to give a major thank you to the #MentalHealthaThon for finally getting this book off my TBR. i can’t believe Words on Bathroom Walls came all the way to Australia with me and i still haven’t read it until now. some things truly escape me.

just make sure to treat these experience with a grain of salt.

❝ I am not a doctor, and ToZaPrex is not a real drug. Adam’s experience is loosely based on documented symptoms of schizophrenia, but a great deal of creative license was taken to describe his auditory and visual hallucinations. ❞ — Julia Walton

though this book is not #ownvoices, Walton did a B-E-A-utiful job describing Adam’s fear of his own mind as he undergoes the clinical trial for ToZaPrex. i don’t have enough fingers to count the times i internally sobbed for his pain. and then at the end physically sobbed and clutched the book to my chest and wished for only positive vibes for all my beautiful fellow people with mental illness.

I’m not supposed to think about my disease as something to deal with. I’m told it’s better to think of it as a piece of me that does not communicate well with the rest of me. But that’s bullshit.

while Adam has his “regulars,” like Rebecca, he still keeps himself on alert at all times to avoid interacting with something that isn’t really there. his hallucinations are these confusing combinations of comforting (because they know him in a way no one else does) and cruel (because they taunt him endlessly).

reading this gave me the oddest mixture of stress and sadness. even at his happiest moments in the book, Adam will catch something in the corner of his eye and wonder if there’s a hallucination incoming. he always F E A R S  that he’s about to show a side of himself that no one can forgive. i wanted him to be able to truly connect with the joyful and frustrating moments in his life!! but i also feared with him, because i know how cruel people can become when they see what they don’t understand.

It’s actually kind of annoying to be quizzed by your therapist. You asking what I know about schizophrenia is like me asking you what you know about dressing like an arrogant snob. I know it because I live it.

first of all, yes, Adam can be snippy. he’s absolutely forgiven because if you’ve ever been to therapy and had the therapist quiz you on your own diagnosis, you’ve reacted the same way.

(i’ve legit had to *teach* a therapist about some of my symptoms.)

Adam is pretty knowledgeable about his diagnosis. as someone with social anxiety, i can say this is completely accurate—the moment i was diagnosed, i read all the internet info.

in fact, Adam shares a LOT of spot-on info about schizophrenia. some i knew before, and some i was like, wow. that’s key intel and this is why i read to inform myself. his sharp intellect is also his vice, as you come to find out.

No, I’m not self-conscious about liking to bake. Yes, I’ve definitely been teased about it before, but screw them. They can’t feed themselves and I can. That’s powerful.

some things you need to know about Adam
✨ he makes a tiramisu that some would call a religious experience
✨ he’s really tall, like, v v tall, but no he cannot play basketball
✨ he knows Captain Louis Renault was the French police officer who helped Rick foil the Nazis’ attempt to capture Laszlo and Isla at the end of Casablanca

i need to talk about how Adam is so wholly Adam. he knows very much who he is. he has an entire identity … and as much as this book is premised on Adam wanting to keep his schizophrenia secret from his peers, his is not an inherently shameful person.

truly, i get no “i’m ashamed of having a mental illness” vibes from Words on Bathroom Walls. it’s much more “life is hella tough and i wish it weren’t this way,” which, fair. Adam is very much a character who tackles difficulty face on (especially seen with privileged and rude classmate, Ian). he confronts what makes him uncomfortable even when those things are the thoughts in his head.

(does he always choose the right confrontation method tho, now there is a question to ask)

look, what i’m saying here is, he knows who he is. and i think that is hella powerful. the real issue in this book is can people handle his whole and complete self, because he’s not going to change.

Other parents wouldn’t want their kids going to school with someone like me. Someone with the potential to lose control.

i want to say Adam is a little baby deer, venturing out into the forest of high school—but that’s just my head over-reaching because I’m so scared for him to get hurt. i love, and adore, and appreciate how strong Adam is in this book. don’t get me wrong, he flops more than once. but his ability to pick himself up is a reminder that a diagnosis is not a definition.

i’m very, very worried that if i touch on Adam’s relationships with his peers and his family too much i’ll venture into spoiler territory. (i’m notoriously bad for this.) what i want to say here is that he gets his fair share of hate because he has schizophrenia. i can’t put into words how angry some comments made me. especially since the disrespect is so real to life, so dismissive in a “how can you expect me to react any other way” form.

some quick things i want to say but won’t write a paragraph on:
✨ Maya is mood
✨ Adam’s mom is an icon
✨ i laughed aloud way more times than i expected

Words on Bathroom Walls speaks to moving past stigma (though not without a little pettiness and a lot of self-worth) because at the end of the day, your sanity is worth more. which is a message i both support and think we all needed to hear.

rating: This book is in my Holy Grail. It’s one I will be re-reading forever and recommending to everyone. Mark this day in your calendar because today my life was changed.
representation: Filipino love interest, main character with mental illness (schizophrenia)
content warnings: suicidal thoughts, mass shooting, depictions of self-harm, strong language, sex