This Is Not the Jess Show by Anna Carey 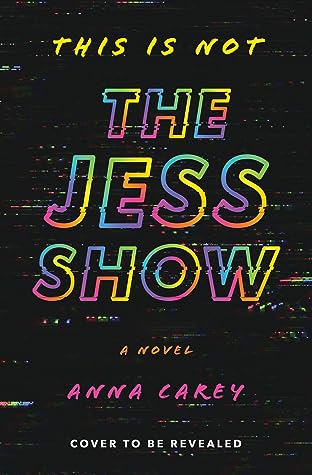 A timely YA thriller about a teenage girl whose reality may not be what it seems, blending 90s nostalgia with a speculative hook that dissects our modern reality TV and influencer-obsessed culture.

Like many teens, sometimes it feels as though everything in Jess Flynn’s life has been engineered for maximum drama–from her performance at the school talent show, to the reappearance of her childhood best friend and perennial crush Jeremy, to her friends trying to set her up with one of the hottest guys in school. It’s almost as if everything might finally be going her way…until one day a tiny black phone with an apple logo on its screen falls out of her best friend’s backpack and lands at Jess’s feet.

The problem is, it’s 1998, and the first iPhone isn’t due out for another nine years.

Jess’s friends refuse to acknowledge the strange device. Her sister Sara, on hospice care with a terminal blood disease, for once can’t tell Jess what she should do. It’s almost as if everyone is hiding something from her. Even her beloved dog Fuller seems different…like, literally different, because he definitely didn’t have that same pattern of spots on his stomach last week…

Nothing in Jess Flynn’s world is as it seems, and as the cracks begin to show, Jess will discover her entire life is nothing more than someone else’s entertainment. Except in this reality, the outside world is no place anyone would want to escape to.

Y’allllllllllllllllllllllllllllllllllllllllllllllll, this sounds amazing. I love this whole concept so much. I totally could get behind my life being fodder for a sitcom or movie or book, and I’ve had this thought before – so why not have a book all about it???? YES, PLEASE. I can’t wait to devour this one up, and I’m so desperate to see what it’s all about. Also, my life is probably the most boring sitcom out there, but I be trying. “She spent 2 hours straight blogging without blinking and our audience is now snoozing.”

✔️ THIS BOOK IS ANNA APPROVED!

I think Anna would do well on a sitcom and actually figuring out her life was somehow, well, a movie called Frozen.

7 thoughts on “Can’t Wait Wednesday: This Is Not the Jess Show”