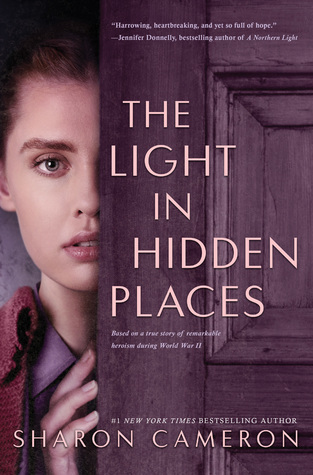 The extraordinary story of Stefania Podgorska, a Polish teenager who chose bravery and humanity by hiding thirteen Jews in her attic during WWII — from #1 New York Times bestselling author Sharon Cameron.

One knock at the door, and Stefania has a choice to make…

It is 1943, and for four years, sixteen-year-old Stefania has been working for the Diamant family in their grocery store in Przemsyl, Poland, singing her way into their lives and hearts. She has even made a promise to one of their sons, Izio — a betrothal they must keep secret since she is Catholic and the Diamants are Jewish.

But everything changes when the German army invades Przemsyl. The Diamants are forced into the ghetto, and Stefania is alone in an occupied city, the only one left to care for Helena, her six-year-old sister. And then comes the knock at the door. Izio’s brother Max has jumped from the train headed to a death camp. Stefania and Helena make the extraordinary decision to hide Max, and eventually twelve more Jews. Then they must wait, every day, for the next knock at the door, the one that will mean death. When the knock finally comes, it is two Nazi officers, requisitioning Stefania’s house for the German army.

With two Nazis below, thirteen hidden Jews above, and a little sister by her side, Stefania has one more excruciating choice to make.

Disclaimer: I received this ARC courtesy of I Read YA through a giveaway. I am grateful for the opportunity to review an ARC for my readers, but this will not influence my final rating. All opinions expressed in this review are my own and based solely on the book.

To be honest, before I won this in a Yallfest giveaway, I didn’t know anything about it. It was a book that never hit my radar, and it was a book that my eyes immediately glazed over. But this is definitely a light in the hidden TBR pile for me, because it was so good.

This story incorporates true life with the fictional. Our heroine, Stefania Podgorska, is a real person that did a lot of the things in this story. We follow Stefania’s story from the very first beginnings of WWII to the very end as she deals with the regular horrors of this timeframe but also the stresses and incredible journey she has as she eventually starts hiding at most thirteen Jews in her house. This story is filled with action, tension, historical events, feels and more. Cameron really dived deep into Stefania’s life, so it’s almost like you’re living her life.

There is no doubt with this story that you can put Cameron in the same place as Ruta Sepetys and Monica Hesse as a fantastic historical fiction writer. Cameron immerses you in the time period – with the descriptions of the place, the feelings of the time, and staying accurate to the wording/events/things/etc. She creates a mood that is haunting and horrific, and I felt like I was dropped on the streets of Poland.

The characters were amazing as well. There are a lot, and a decent amount come and go. There was only one point that I thought, huh, I’m not sure who exactly these people are all, but that was it. Each person had their own distinct personality, and dynamic characteristics that went to them. Yes, these were real people, but Cameron truly made them come alive in the pages of her story.

Our true shining stars of these novel were our heroine, Stefania; her sister, Hela; and Max, the brother of Stefania’s first love and the boy that started it all. Stefania – both the real life person and our main character – is an incredible person. She faced so much in her life, and you are put into her shoes in this story. You felt everything with her – the hope, the fear, the anger. You go along her emotional, physical, and mental journey, and it truly is a stunning one. I loved her voice, and it’s so so so easy to cheer her on.

The story is always keeping you on the edge of your seat. I binge read a good deal of it on a Saturday night, because I just had to know what was going to happen. You think things are bad? Trust me, they always get worse and more deadly in this story. Since the material is quite heavy and dark, you won’t be necessarily speeding through it, but you’ll be wanting to devour it to find out what is going to happen.

The beginning was intriguing, but was a touch off. I felt like we were rushing through things, and I guess I would have preferred a touch more context on some of the events that began. I know a good amount of information on WWII, but I felt like I needed a bit more to fully grasp all of the situations that were happening at first. There was a lot of material to cover as we were trying to cover quite a few years in a 400 page novel, so I understand the need to have a quicker pacing. But it did mess with me a bit at first.

Towards the middle, too, despite there being a lot of material and the quick pacing, it did feel like it was a 400 page novel. I felt those 100 pages between 200 – 300. Once we got into the groove of the story, there was no other issues that I had with this book, and these really didn’t affect my enjoyment of reading this book a lot.

Overall, this was an incredible story, and if you’re looking for a fantastic historical fiction novel to pick up, this is the one to do it. It’s a take that I haven’t read before in WWII books I’ve read before, and it’s one filled with amazing hope and horrifying terror. Definitely a must read!

rating: Anna because it was so close to perfection
representation: Jewish main characters
content warnings: death, murder, genocide, discrimination, alcohol, sexual intimidation (nothing graphic – just intense situations where it could happen or the threat of rape is there)
read this if you: if you want a story of hope, courage, and incredible strength in one of the darkest periods of history

7 thoughts on “ARC REVIEW: The Light in Hidden Places by Sharon Cameron 💭 Fans of Monica Hesse and Ruta Sepetys Rejoice, ‘Cause This Should Be Your Next Read”