spoiler alert: this post is not going to tell you what to read or ensure that you will love it

“But Sha!” you say. “That is literally the title!”

Look. I thought about it. I considered listing books that almost unfailingly earn five stars and earn heaps of praise. But the fact is, book taste is selective. Not only to each person, but to the mood that person is feeling on a particular day. I might vibe a mystery read one Tuesday. Pick up BOOK A. Feel completely ambivalent about BOOK A … when if I had read BOOK A two weeks later, I would have loved it.

Who even knows how it works. Yet it works that way. If you’re a reader, you know you’re nodding like, “Omigod, so so true.”

What am I going to do though? Let me take a few to break something down first.

where am i getting my books from?

I went through the 122 books I logged on Goodreads to see where they came from. (I only started my account in March of 2018.) In that time, 73 of my reads were personal purchases. Thirty-two were ARCs and seventeen came from the library. 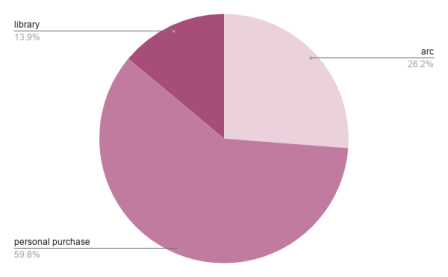 This was a huge surprise, because I haven’t bought that many books in the last year and a half. Then I remembered I rely a lot on my owned TBR for read-a-thon prompts. But I’ll get into that later. The real reason I wanted to get into where my books come from is to lead to the next graph I cooked up: a combo of “where do my books come from” and “what do I give the highest ratings.”

*a moment of silence for how long this took me to do, because I have never made a pie chart before, and also miscounted my books three separate times

which books lead to higher ratings?

+ how you can pick books you’ll enjoy 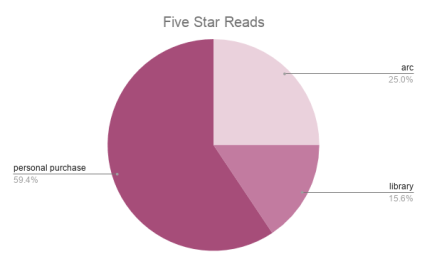 A quick glance at these charts may not reveal much. But they actually tell me a lot about my reading habits — and may even predict what I should read next.

(see! I don’t do clickbait titles. just ones you have to read the who-o-o-ole post to get the gist)

(and no, I’m not saying you need to put all your goodreads stats into a graph, don’t worry. keep reading, you’ll see where i’m going with this.)

Before looking through my Goodreads data, I thought I had terrible luck with ARCs. You know how bad experiences leave strong impressions? But I can’t blame ARCs—turns out in comparison, I’ve left ten under-two star reviews for books I chose “personally,” either from the library, or from the store.

In total, I’ve reviewed and rated 32 ARCs, and rating five books under two stars isn’t bad in my opinion. There are always going to be books that don’t meet what you expected. What I did learn?

💥 Make sure to request books you’re actually interested in. Two of the books I rated low were ones I had no interest in the summary, but I accepted anyway because I was so new to blogging, the concept of an ARC was exciting. I’m sure you’ve heard this a million times, but it’s true!

In that vein, look up as much as you can before requesting an ARC. Just like you research a book you want to buy, don’t just rely on the information NetGalley provides. Check the Goodreads page, see if any blogger friends know anything, etc. before hitting request. Make sure you feel some excitement before committing. 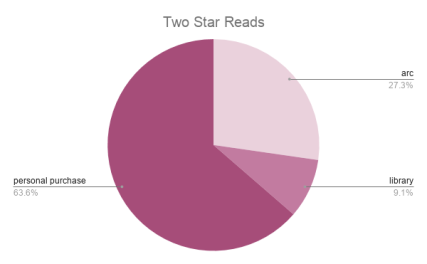 The stats for my “personal purchases” don’t change much throughout the graphs, and there’s a simple reason for that: I own a lot of books, and I love to re-read them. Sometimes that turns out great. I find a new favourite if it’s new to me, or I get hit with nostalgia (blissfully ignore any flaws) and easily award five stars. Other times, I realize what I loved before didn’t age well. Either way, they lead to pretty passionate reviews!

There’s a few things to say about your personal purchases and owned-TBR though.

💥 Don’t feel forced to read a book because you own it. Sometimes we buy a book in the heat of the moment and on further reflection, realize it doesn’t cater to us. Instead of forcing yourself to read it because money was spent or time was invested, pass it on. Donate the book or trade it online.

💥 If you want to read it, read it. Sometimes it’s really that simple. Often we put aside books we want to read because there’s an ARC we need to finish for review, or a hyped book everyone is begging us to try. It’s okay to dig out an old favourite for re-read if that’s where your heart is calling.

💥 Don’t let the hype guide your wallet. You want to love the book. And you need to remember that what others love isn’t always going to be what you do. My own example for this is The Cruel Prince. We can all agree that is one of the most hyped up YA books. And I stood my ground: I didn’t want to read it, because I could tell it wouldn’t be something I would enjoy. Finally, Mandy and I planned a blog post where we would read hyped books and react. I didn’t enjoy TCP, but I got a post out of it, so?

If you know you won’t like something, don’t feel forced to try it because everyone says differently. It’s okay to have different tastes!

(not to say don’t try new things, but at the same time, this kind of “try new thing” takes at minimum six hours of your life)

I’m going to close on library books. They’re a perfect middle ground. If you don’t enjoy a library book, you haven’t lost money, since you didn’t pay anything for it. And you’re not expected to write a review as you would an ARC, so you’re not damaging anyone’s sales. Bu-u-u-t there’s still the fact that you, yourself, landed on a book you didn’t enjoy when you hoped you would.

I seem to strike out the most with library books. (The graphs don’t show it, but that’s simply because I’ve read more personal purchases.) This is because I’m more willing to take risks on them. What if you don’t want to take a risk?

💥 Research the book before you commit. Just as you should an ARC, dig into what people say about the book. This is a tough one to do without spoilers. If you have blogger friends who’ve read it, ask them: is this a good book for me?

💥 Skim the book before taking it out. Sometimes I know just by reading the first page that I won’t enjoy a book. Maybe it’s told in second person (I’m not a huge fan). Or the writing style is too descriptive (as in, I don’t even know if we’re on Earth or not.) It can even help with telling if this is the book you’re in the mood for right now.

This looks like a lot of instructions. And well, there are. I’m sure we do many of them already. It’s intuitive: we want to enjoy the book we’re reading. Who wouldn’t?

At the same time, it’s simple enough to just look at a cover, say, “Hmm, looks cool,” and take a chance. Because sometimes, you really just have to take a chance. Like it, love it, or hate it, there’s a beauty in being completely surprised by what’s under that cover.

my final tip? Read for yourself. That’s the fastest and surest way to always find pleasure in the books you pick up.

how do you pick what you’re going to read next?