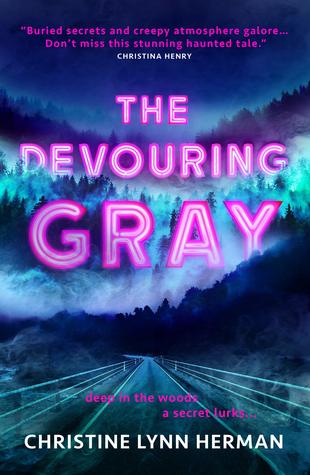 Branches and stones, daggers and bones,
They locked the Beast away.

After the death of her sister, seventeen-year-old Violet Saunders finds herself dragged to Four Paths, New York. Violet may be a newcomer, but she soon learns her mother isn’t: They belong to one of the revered founding families of the town, where stone bells hang above every doorway and danger lurks in the depths of the woods.

Justin Hawthorne’s bloodline has protected Four Paths for generations from the Gray—a lifeless dimension that imprisons a brutal monster. After Justin fails to inherit his family’s powers, his mother is determined to keep this humiliation a secret. But Justin can’t let go of the future he was promised and the town he swore to protect.

Ever since Harper Carlisle lost her hand to an accident that left her stranded in the Gray for days, she has vowed revenge on the person who abandoned her: Justin Hawthorne. There are ripples of dissent in Four Paths, and Harper seizes an opportunity to take down the Hawthornes and change her destiny-to what extent, even she doesn’t yet know.

The Gray is growing stronger every day, and its victims are piling up. When Violet accidentally unleashes the monster, all three must band together with the other Founders to unearth the dark truths behind their families’ abilities—before the Gray devours them all.

Literally, this book will totally be winning the ultimate mood/atmosphere for me for 2019. It honestly felt like the combined feel of Stranger Things, Riverdale, and Twin Peaks mushed up into one while giving me something fully new. Every moment was me in my feels, screeching this is a JAM.

This book was pitched pretty much as a Stranger Things like book, and it really kind of delivers. Instead of the Upside Down, there is the Gray where a creepy af Beast is chilling and killing a bunch of innocent townspeople. There are four families that protect the town, and this story follows each of the four teens of the four families. While they aren’t the fun loving little Stranger Things kids, they were still an intriguing gang with an interesting mystery.

The characters were good. They are all sorts of messy and angsty and, well, moody, but they did bring intrigue. They were all so morally complex and complicated, and they might even be considered antiheroes? I didn’t feel a super super strong connection with any of them, but I did enjoy Issac and Violet the most. I’m not quite sure what brought me the disconnect, but I think we just need a slightly deeper dive into each of their characterization and we would have been good.

That being said, the plot was interesting, for the most part. It kept me interested, but I do think that sometimes we circled around a bit. I mean, I know we were showcasing some real life reactions like with Harper’s anger, but honestly, like I felt like I was on the Stranger Things bikes going in full on circles. And some things didn’t would drop out a bit to bring back up later on. However, it really was a spooky, atmospheric plot to combine with the feels it was already bringing.

What I did love about this novel is the lack of focus on romance. To be honest, I kind of expected this to go like Riverdale where everyone just pairs off and we end up with total coupledom. We might have seen some attraction or unrequited love on people’s part, but it was never the main focus and might have been a few moments here or there. With as much going on in the dynamics of this story, it felt refreshing to focus just on the twisty and turny and other things.

I did have a disconnect of sorts with the novel overall. Like, maybe it was just so focused on dark and spooky and atmospheric that the emotional pull get suckered away? I just didn’t have the deep deep feels that made me connect with it and squeal about it and stuff. Even now as I’m writing this review, I’m feeling a little bit removed even though I did really enjoy it for the most part. Overall, though, it was a good read despite the disconnect.

rating: 4 crowns & an Ariel rating because while it brought so major greatness and will totally last, it wasn’t full epicness.
representation: bi main characters, bi/lesbian side characters
content warnings: death, murder, some gore, death of animal

11 thoughts on “BOOK REVIEW: The Devouring Gray 💭Basically, like, the ultimate mood of 2019?”