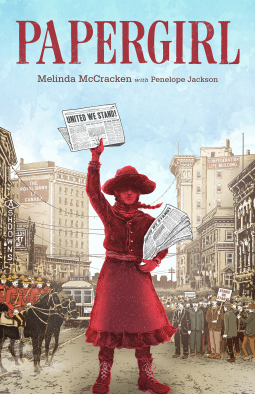 Ten-year-old Cassie lives with her working-class family in 1919 Winnipeg. The Great War and Spanish Influenza have taken their toll, and workers in the city are frustrated with low wages and long hours. When they orchestrate a general strike, Cassie — bright, determined and very bored at school — desperately wants to help.

She begins volunteering for the strike committee as a papergirl, distributing the strike bulletin at Portage and Main, and from her corner, she sees the strike take shape. Threatened and taunted by upper-class kids and hungrier by the day, Cassie soon realizes that the strike isn’t just a lark — it’s a risky and brave movement.

Disclaimer: I received this ARC courtesy of Roseway Publishing through NetGalley. I am grateful for the opportunity to review an ARC for my readers, but this will not influence my final rating. All opinions expressed in this review are my own and based solely on the book.

The 1919 Winnipeg General Strike was one of the most influential strikes in Canadian history, and set the groundwork for positive change for workers. Papergirl, Afterword

I am the most ashamed Winnipeg native right now. I had no idea this was part of our history! I did do all my education in Quebec, but honestly, this huge gap in my knowledge cannot be forgiven.

When ten-year-old Cassie first hears about a strike, all she can think is, “Cool, does that mean I get time off school?” She knows that the high cost of food and equally low pay for workers means people are struggling. Her best friend Mary comes to eat at her house, because food is so scarce at her own home. But the whole concept of people not working seems more like an extended vacation — even to the adults, at first, who think the strike will last no more than a week.

The path from the strike to worker’s rights wasn’t short or straightforward. It took almost three decades after the strike for Canadian workers to win the right to representation by a union and collective bargaining rights. Papergirl, Afterword

As the strike is extended, Cassie and Mary leave school to help with the cause. Mary, along with her mother, works at a kitchen providing food for women and children. Cassie, our heroine, sells the bulletin containing updates on the striker’s progress.

Cassie learns how important it is to spread the truth, and falls in love with her job as a papergirl. She also witnesses firsthand the difficulties of poverty and true hunger. As a papergirl, she observes a boy who works for the “rich people,” those who do not see the importance of striking. This boy, Freddy, hides his identity as an immigrant to make money for his family.

“Can they really send people back to England?”
“They can do anything they want.” Freddy shrugged […]

Papergirl is educational, with a positive message. Clearly I knew nothing about the 1919 Winnipeg General Strike, and McCracken’s work illuminated me. Description is given to the food, the way of life, the clothes people wear. What I love most is that this middle-grade novel sheds light on an important moment in Canadian history that has such relevant ties to issues today.

The information can be passed on a bit heavy-handed on times, particularly in the first two chapters. I think this book is best for classroom use, or for paired-reading (older person with child). This way the younger reader can be assisted during more difficult passages. There is also a trigger warning for death, starvation, and violence. These scenes are not described in detail but could be frightening to some children.

3.5 crowns. Interested readers need to be aware this is not an action-packed book but one focused on the learning aspects of this historical period. The informational portions of the book sometimes came in stronger than character development. An overall enjoyable read.

How much do you know about Canadian history?