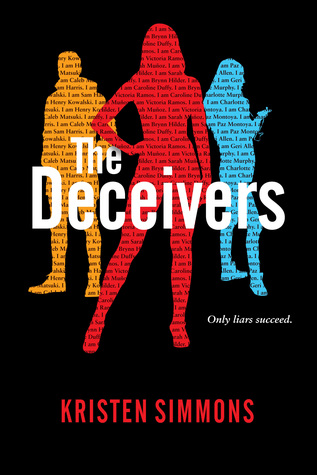 Welcome to Vale Hall, the school for aspiring con artists.

When Brynn Hilder is recruited to Vale, it seems like the elite academy is her chance to start over, away from her mom’s loser boyfriend and her rundown neighborhood. But she soon learns that Vale chooses students not so much for their scholastic talent as for their extracurricular activities, such as her time spent conning rich North Shore kids out of their extravagant allowances.

At first, Brynn jumps at the chance to help the school in its mission to rid the city of corrupt officials–because what could be better than giving entitled jerks what they deserve? But that’s before she meets her mark–a senator’s son–and before she discovers the school’s headmaster has secrets he’ll stop at nothing to protect. As the lines between right and wrong blur, Brynn begins to realize she’s in way over head.

Disclaimer: I received this ARC courtesy of Tor Teen through NetGalley. I am grateful for the opportunity to review an ARC for my readers, but this will not influence my final rating. All opinions expressed in this review are my own and based solely on the book.

A book about a school for teen con artists. I might have squealed internally when I saw the summary, I definitely squealed externally when I saw I was approved for a review copy, and it’s up for debate how many times I paused in my reading to praise favourite moments to my co-blogger. The Deceivers sucked me in from the start, with Brynn conning some ballet students into purchasing fake tickets to a theatre show and then heading home to confront her mom’s drug dealing boyfriend.

Brynn is street-wise heroine who has long-since learned that fortune doesn’t favour those who grew up in the wrong part of town and definitely not those who don’t try to make more from their situation. Throughout the book, her wits get her out of tricky situations, and prove again and again that book smarts aren’t the only useful intelligence. I adoooored her personality, and her character arc on “who am I when I’m not conning people” was extremely well-written.

Brynn is able to see the grey area in society’s laws, but that is tested when she joins Vale Hall, an extremely exclusive school that teaches its students how to extract secrets. Its director, Dr. Odin, assigns her to befriend a politician’s son and find out his secrets. This is one of the major plot threads in the story: what is the secret? Can Brynn actually con someone? Is she made out for this new lifestyle? At the school, Brynn makes good friends and also starts a romance, but what I loved the most was the entire air of “can I actually trust this person?” that circulated with every chapter. Everyone at the school is nice and welcoming to Brynn (minus one), but everyone also has their own motives, which gave the book depths I didn’t expect.

The other major plot in the story is based loosely around her mother’s boyfriend, Pete, and Brynn’s efforts to free herself from his control. As I said before, Pete is a drug dealer (a pretty major one in Brynn’s hometown). His emotional abuse of Brynn and her mother is very well depicted in the book. In one scene, Brynn sits beside Pete and relates how his commands to “sit” make her feel like a dog, but that she fears acting out against him. Both plot lines are resolved by the end of the novel, and are given an equal amount of page time to develop. I had no clue how they would wrap up, because so much was happening, but Brynn was absolutely brilliant once again and solved everything and wow she’s my personal hero.

The writing in this book was a shining glory. (It was definitely better than that metaphor.) Simmons provides an accurate representation of emotional abuse that alone marks this book as a must read. But I cannot forget to give praise to the subtle commentaries on power dynamics we see once Brynn starts at Vale Hall. I hope to see so much more of that in the sequel!!

This book gets a 4.5 crown rating for me. I highly recommend you pick this book up because seriously there are teenagers learning how to be con artists and Brynn is an amazing heroine that you will want on your team. SO so glad this book came my way, and I hope it passes yours too!

Do you think you could make it in a school for con artists?

8 thoughts on “ARC REVIEW: “The Deceivers” by Kristen Simmons 💭”