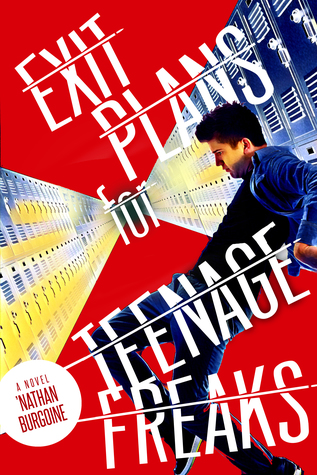 Being the kid abducted by old Ms. Easton when he was four permanently set Cole’s status to freak. At seventeen, his exit plan is simple: make it through the last few weeks of high school with his grades up and his head down.

When he pushes through the front door of the school and finds himself eighty kilometers away holding the door of a museum he was just thinking about, Cole faces facts: he’s either more deluded than old Ms. Easton, or he just teleported.

Now every door is an accident waiting to happen―especially when Cole thinks about Malik, who, it turns out, has a glass door on his shower. When he starts seeing the same creepy people over his shoulder, no matter how far he’s gone, crushes become the least of his worries. They want him to stop, and they’ll go to any length to make it happen.

Cole is running out of luck, excuses, and places to hide.

Time for a new exit plan.

Disclaimer: I received this ARC courtesy of Bold Strokes Books through NetGalley. I am grateful for the opportunity to review an ARC for my readers, but this will not influence my final rating. All opinions expressed in this review are my own and based solely on the book.

tl;dr: READ THE BOOK. NOW. IT IS AMAZING. thank you.

Anyone reading my disclaimer can very easily tell I requested this from NetGalley which means, yes, I had an interest in this book before flipping through its pages (which you can do at a store, post-publishing). I did have a bit of hesitation, which came from the just-a-bit ramshackle summary BUT it did promise nerdy cuteness and a fantasy-contemp mix so ya girl was in. And then. I fell. IN LOVE. *sings a thousand praises and then remembers real words are required*

First off, this book lives and breathes on its characters. So many freaking amazing characters. With ALLLLLLLLL the LGBT+ rep it’s too stunning (or just stunning enough, you tell me). Our protagonist Cole is gay, and his best friends make up the school’s Rainbow Club. Okay 1) can they be my friends because they’re really cool (and realistic teens wow) and 2) let me just list the rep for ya since we have: bisexual, asexual, pansexual and lesbian teens living breathing and talking. All over the place, I know, it’s crazy madness. (I even might have not listed some so you can be surprised by EVEN MORE REP.)

As a sub-paragraph to that, Burgoine doesn’t just “include” a bisexual teen (ex). Each character is first and foremost a person with their own likes and dislikes and then also btw bisexual. But he also allows the characters to question their LGBT+ knowledge which I loved. Not only did it allow me as a reader to learn more, it also showed that you can be LGBT+ and not know every in and out of the community. It’s okay! The point is: keep learning. Be okay with continually learning.

As someone who is not part of the LGBT+ community, this aspect of the book resonated with me because of my high school experience. I had close friends who identified as LGBT+ and sometimes I would swerve around topics because I thought they knew everything and me even asking would make me look so dumb and ignorant. This book just cemented the fact that no one can know everything AND … avoiding even asking? Missed opportunity for everyone to learn. Also I totally know there are so many Nats out there ready to welcome me in. << You would get the reference if you *read the book*

Anyyywayy, if I didn’t go on about that long enough. Cole has nerdiness and quirks down pat. I was chuckling at his awkwardness throughout the book. I clicked with so many of his passions too: bullet-journaling, lists, love for board games. He also takes his sudden ability for teleporting in such stride. I mean, one day you find out you can teleport. For Cole, that means the next day you just casually start practicing on the DL. I *loved* it, because let’s be real, most teens would secretly build up their skills before telling anyone. Then evil people are after him and the way he handles it all is just true badass mixed with, well, true Cole-dorkness. I loved it.

This review is getting long and I don’t think I gushed enough. There is so much more love. Cole wants to be an interpreter (of ASL) like his father. The Deaf culture rep was sooo amazing, I didn’t expect it to be there and lived for that moment. I wish there was more explanation on how his father interprets (I only knew of Hearing people being interpreters before).

Cole and Malik were such a great relationship. As far as I’m concerned, the next great contemporary ship. Mole. Calik. (The name might need work.) I found myself smiling like a true dork while reading about them on “not dates.” #BULLET+SPORTSBALL4EVA

My biggest (non)complaint is that there is not already an official sequel in the works. The world-building/description could have used a bit more work though, which is why in official ratings I knock off half a point. Sometimes I couldn’t place where I was (in the Rainbow Club room? outside by the tree?) until much later, so Cole was just kind of floating in space, talking. But anyway, y’all know how rarely I gush so … this book. Is good. 4.5 crowns.

What is one of your fave contemp reads?