And we’re back for Round 2!

In case you missed it, I covered all of my Friday dealings in this post right here. It had a pretty chill Friday, but Saturday aka Day 2? That was the madness. I had no clue what to expect, and I’m still kind of in shock and awe?? WHAT IS LIFE???

So, let’s get straight to the activitiesssssssssssss. Because there is much. And I’m going to try to condense as much as possible, since there is a lot, and I don’t want here to be for fifty years with my rambles like I usually do.

8:00 a.m. – That’s right, we started this day at 8:00 even though Yallfest didn’t technically open until 10:00. Apparently this is dedication, and I was somehow even late to this??? There was people that were out even earlier, and I am impressed.

I wanted to start off the day with Wake Up with Wednesday Books at the Fierce Reads booth which promised a tote bag and an ARC giveaway. I thought – what better to start with a free book and another tote bag??? Plus, CROISSANTS. AND ORANGE JUICE. I DON’T LIKE ORANGE JUICE, BUT LIKE, IT SEEMED IMPORTANT.

I waited in line for about an hour, and then discovered that they were all out of the ARCs that they were given – which was Again, But Better by Christine Ricco which wasn’t a great loss since I passed it up yesterday. I stuck around in the line to pick up some swag from Fierce Reads and then moved on.

10:00 a.m. – My next decision was a bit of hard one. I could go to the Jenn Bennett giveaway at Riveted’s booth or Justin Reynolds giveaway for Opposite of Always at Epic Reads. I was a bit more partial to Jenn Bennett, since Serious Moonlight is one of my most anticipated reads. However, I tried to get in line, but it turned out to be Queen of Darkness (new Cassandra Clare book) sampler line which I did not want and jumped into another one but it ended up being their lollipop wall. I won a little Shelf Queen button, a little crown (which, of course, is fitting), and Dum Dum…but still couldn’t find the Jenn Bennett line so I called it a lost cause and went to the Epic Reads tent.

So so glad with this decision. I was one of the last few to grab a copy of Opposite of Always and the Time Loops swag, and Justin Reynolds happened to be there so I got it signed. He was super cool, and we talked about his sweater because it was actually pretty chilly this morning (omg, wow, all of yallfest convos are about weather??? what is life???).

Once I was done with that, I wandered around for a bit, and then decided to head over for my next signing.

Ugh, 11 was SUCH a messy hour. Everything I wanted to do a lot was in this hour. I had 2 signings, a few ARC drops, and more. I made the decision the night before I wanted to do Stephanie’s signing instead of Roshani Chokshi’s because despite my enjoyment of her books, Strohm’s book It’s Not Me, It’s You is one of my all time favorites, and she was one of the names I seriously SQUEALED about when I saw she was gonna be there. I figured her line might be a bit shorter than Roshani’s, too.

I was second person in line, and it was a chill waiting time. I met her, and it was easily the best decision I made. She is the sweetestttttttt, and so super nice. We talked about the weather (OMG, AGAIN, WHAT IS THIS), and how it was snowing back where we were. She told me that Avery (the MC of It’s Not Me, It’s You) is based a bit on her sister. We talked about how it was the first time away from her new baby and how it was such a struggle. She is so sweet, and it was so much fun. Seriously, I forever rec you check her books out because she is the best. 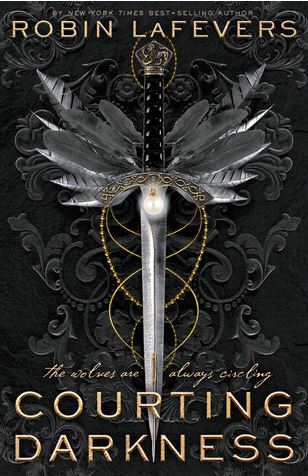 11:30 a.m. – I got out off Strohm’s signing maybe ten minutes after? And at 11:30, they were dropping Courting Darkness ARCs. If you have been a follower of this blog for any length of time, you know Sha and I are trash for Grave Mercy and Robin Lafevers. This book is a continuation of that series and I’ve neededdddddddddddddddd it in my life since I heard of its existence. I HAVE NEVER SPEED WALKED SO FAST IN MY LIFE TO GET BACK TO THE AREA.

So I got in line, and when 11:30 rolled around, nothing happened. We stayed exactly where we were for a whileeeeeeee. I started the panics, because why weren’t we moving??? Then Robin appeared and came down the line counting us, and I was like, is there not enough???? Apparently, they were having people sign up for the newsletter, so it was taking a while. I thankfully had already signed up (because I mean, obviously stalking their emails for Courting Darkness shoutouts). So I snatched my copy from Robin (!!!), and ran away.

1:00 p.m. – There was nothing I super wanted at 12:00, so I used this time to eat a protein bar (omg, you literally really do NOT eat in all the craziness), find a rest area, and start my waiting in line for Wicked Saints.

This was the messiest moment in Yallfest, for me, at least. We were all lined up for Wicked Saints at the Fierce Reads booth. I was super excited for this one because I’m obsessed with anything Polish based and this is based on some folklore, I believe. They were giving away some of their last bound manuscripts, so I totally needed to be here.

Around 12:30, one of the Fierce Reads people came by and was like, hey, this isn’t an official line you’re in, since we don’t officially line up until 15 minutes ahead of time. All of us nodded, but figured we’d stay since we were toward the front of the line. However, we started to notice people kind of just milling around the front of the booth, all congregating in different spots, hoping to find the right place around the line. Around 12:46, Fierce Reads announced their official line…which was a few feet to the right of the line that was formed organically.

What happened next was mass chaos. Instantly, everyone started running, full speed ahead to the new line. People were slightly tripping over each other. We all globbed together in a blob instead of a true line, and I’m pretty sure there was shrieking and screeching. It was crazy.

I ended up pretty much in the same area I was in the first place. The Fierce Reads people started passing out sticky notes, but then well, people were clearly upset. There was definitely people loudly complaining, and there was a lot of mass confusion. Were the 40 people that got sticky notes it? Were there no more ARCs after those 40? After a few minutes, some people directly in front of me asked the booth, and that was it. Everyone pretty much dispersed quickly, and I was part of them.

I went to the NOVL Lollipop, Lollipop because they were giving ARCs away depending on what Lollipop you got. I really wanted You Must Not Miss, but I ended up with We Contain Multitudes, which I don’t know too much about.

In line, HMH was also giving away ARCs and swag, so some super nice people held my line and I grabbed an ARC of Mary Shelly that came out earlier this ear and some pins from Grim Lovelies. When I was done, I actually instantly jumped into Pique’s ARC giveaway for Cold Day in the Sun because it was super short and got a sampler of Stain by AG Howard and an art print of The Raven’s Tale by Cat Winters.

3:00 p.m. – From there, I decided to go get in line for Robin Lafevers. I was super scared this line was going to be massive, so I went in search of it. I thought I saw it was in the Best Friend Train Museum so I went over there. I ended up at a perfect time where Penguin Teen was doing Let Penguin Teen predict your future. You would go up and pick 1 out of 3 cards, and then get an ARC and a super cute foam dice. My future promised Adventure and I got The Afterward by EK Johnston.

I asked a super nice volunteer where I needed to go, and she directed me back to the Blue Bicycle Tent. I ended up pretty close to the front of the line, and I chatted a bit with the girl behind in me in line. I convinced her to buy the next two books in the series, so I’m calling alllllllllllllll the successes.

And then it was game time. I. Met. Robin. Lafevers. INTERNAL AND EXTERNAL SCREAMINGGGGG. She was super chill, and she told me to let all my fangirling out when I told her I was trying not to lose control. I couldn’t figure out much words, but I didn’t talk about the weather??? I think I totally messed everything up, but I think I might have killed her a little bit when I told her “every time” I read Grave Mercy and she chuckled. BUT IT WAS AMAZING AND NOW I HAVE ALL THE SIGNED GLORIOUS BOOKS FROM HER.

After that, I didn’t know what to do because I just met Robinnnnnnnnnnnnn. I literally just wandered around for a bit, and realized I could go to Get Underlined which was doing Tarot Readings. I followed this woman in front of me to the back, and picked up Come Find Me (WHICH I AM SCREAMING SO MUCH ABOUT) and Field Notes on Love by Jennifer Smith.

After that….I was so lost. My family called at this time, and I had zero food beside protein bar, and the next real thing I wanted to do wasn’t until 4:30 so…I called it a day. However, while I was waiting, I saw I Read YA was dropping an ARC…so I snuck into the back of the line and got one.

Andddddddddddddddd that was it! Your girl survived Yallfest and I got the most important things I wanted accomplished. I do wish I would have found time for a few more signings, but the ones I went to were amazing and it wasn’t in the cards. Besides the chaos of Wicked Saints, everything else seemed to go pretty good. I now have a lot of books IDK what to do with since I have zero room, but I desperately want to go backkkkkkkkkkkkkkkk ASAP. Ugh, once you get a taste, it’s so so so hard not to want more.