Dexter meets This Savage Song in this dark fantasy about a girl who sells magical body parts on the black market — until she’s betrayed.

Nita doesn’t murder supernatural beings and sell their body parts on the internet—her mother does that. Nita just dissects the bodies after they’ve been “acquired.” But when her mom brings home a live specimen, Nita decides she wants out — dissecting living people is a step too far.

But when she tries to save her mother’s victim, she ends up sold on the black market in his place — because Nita herself is a supernatural being. Now Nita is on the other side of the bars, and there is no line she won’t cross to escape and make sure no one can ever capture her again.

Nita did a good deed, and it cost her everything. Now she’s going to do a lot of bad deeds to get it all back.

This was an odd little book that I both really enjoyed and was really detached for it. This is quite unlike any book in YA that I’ve ever read, and Schaeffer did some amazing things with it, but other parts just kind of fell apart.

What I Liked:
– morally gray characters that stayed morally gray and left a LOT of questions on what it means to be good, bad, or something in between. Loved the dynamic of them and makes you question a lot, and it was some good thinking.
– the characters were intriguing and interesting. While I never really felt a strong, strong connection to any of them, I did feel like they were dynamic and fit right for the story. Nita was definitely a strong, compelling heroine for the story. She was morbid af, but it worked so so well.
– the world was wholly intriguing and intricate. I would have liked a little more understanding how people gained their powers, but I loved the world that Schaeffer created. The black market, the INHUP, and more were such intriguing plots/concepts.
– the setting. It was wonderfully done and quite well crafted.
– the twist at the endddddd. Not the cliffhanger but maybe 3/4 in? I didn’t expect it, and it really picked it back up for me.

– no real romance – yes, YA without the feels – which is what this story needed

What I Disliked:
– I really felt a disconnect from it. I’m not sure if it was the writing or if it was just a personal preference, but I just never really connected with it fully. I think it might have been a personal preference, but I just felt like I was not fully in deep with it.
– I think it hit a lull about halfway through, and I really just wanted it to hurry up and move along. Again, there were things happening, but I just wasn’t as intrigued anymore.

Overall, this was such an intriguing read, but it did have its flaws. If you’re looking for something that is just totally out of the norm of YA, this book is totally for you. It has morally complicated questions and brings up a lot of questions on what was good/bad/something in between with an interesting and complex world full of magic. The main issue was the disconnect that I felt for the book, but overall, it was a pretty good read. 3.5 crowns and a Jasmine rating! 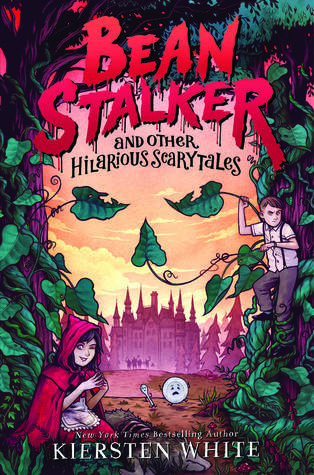 Once upon a time, a girl skipped into the forest and became a zombie.

Wait, no, that’s not how this story is supposed to go. Let’s try again.

Once upon a time, a boy did a horrible job as a sheep-sitter and burned his tongue on stolen pie.

No, children in these stories are always good and virtuous. From the top.

Once upon a time, a king and queen tried to find a princess for their son to marry, and he wound up fleeing from a group of very hairy vampires.

What about, once upon a time, a bunch of fairy tales got twisted around to be completely hilarious, a tiny bit icky, and delightfully spooky scarytales… in other words, exactly what fairy tales were meant to be. Grab some flaming torches, maybe don’t accept that bowl of pease porridge, and get ready for a wickedly fun ride with acclaimed author Kiersten White and fairy tales like you’ve never heard them before.

This was such an odd little read. I don’t really know quite what to do with it. There were parts that were great and sort of funny, but for the most part I was just blinking rapidly, trying to understand what was happening. The writing, I think, was the biggest issue for me. At some points, it sounded a bit like it was trying way too hard to be funny and quirky and it kind of resulted like it sounded like it was on speed? There was literally a page about how people were days of the week and I literally just flipped through it, because I mean, whyyyyyy? It really threw me off.

I will say, though, that White did a good job of tying things together, and I do have to say that a few things did turn out much more creepy than I originally thought so I really have to give White credit. It’s like White took all the nice, seminormal stories you hear as a child and adds in vampires and zombies and snakes.

Overall, I’m really not sure what to do with this book. There were a few good moments, but overall, I just blinked quite hard at the book, trying to figure out what is going on. It’s an interesting little read, but very underwhelming. The pictures were the best part?? 2 crowns and a Cinderella rating!

What do you think? Do you like creepy novels? Or do you stay far away from them? Let’s discuss in the comments below!