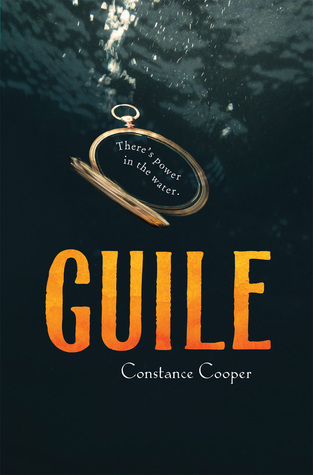 In the Bad Bayous the water is thick with guile, a powerful substance that wreaks unpredictable changes on objects, animals, and even people who soak too long.

Sixteen-year-old orphan Yonie Watereye scrapes a living posing as someone who can sense the presence of guile, though in fact she has no such power–it’s her talking cat, LaRue, who secretly performs the work.

While hunting for the secrets of her mother’s past, Yonie discovers that someone is selling dangerous guile-changed objects for malicious purposes. Soon the resourceful Yonie and her feline companion face threats that could end their adventuring forever.

Oogie Boogie: A spooky book you’re taking a gamble on.

Guile is my fifth and final selection for BPR’s Halloween Read-a-thon: Nightmare Before Book Princess Reviews. I bought this book soon after its release date back in 2016, prompted by its promises of magical “guile” water. However, once the book landed on my bookshelves, its intrigue faded and I never got around to reading it … until now.

The first third of this book was aimless, if interesting. Yonie Watereye is introduced as an orphan sixteen-year-old who makes her meager living posing as a “pearlie,” a.k.a. a human who is able to sense if objects have been imbued with magic. The actual pearlie (or slybeast, rather) is her cat, La Rue. Yonie takes on a client that I assumed would launch the plot forward — but instead seemed to be one in a series of stepping stones towards the larger plot, which only kicked in much later.

Cue me growing invested in a story-line that meant very little twenty pages later. I simultaneously appreciate Cooper’s skill in creating fascinating adventures/mysteries for Yonie and La Rue to solve … and dislike her consistency in abandoning those plot threads with little resolution for the characters involved. One example I’ll use comes from the very beginning of the story (so I will spoil little). Yonie and La Rue receive an item from a client but the client goes missing. They search for the client, meet his family while trying to find them, assume the item has something to do with it all and look into the item’s history, so on and so forth. THEN Yonie comes across a different mystery and, while she does end up figuring out where the client went, the reader does not get any reunion with the client, we do not meet the family again, anything. The level of investment at the beginning does not match the mini-plot’s wrap-up.

Obviously Guile had its own universe to introduce, which Cooper did without leaving info dumps scattered on the pages. (Thank you!) But she also did not give me a full picture of what guile was, or how a person becomes a pearlie, or where exactly all this was taking place until halfway through the novel, which did complicate reading somewhat. This did not make reading the book impossible, but it does bare mentioning: if you’re a little disoriented at the start, explanations will come.

I loved La Rue. A talking cat? That can go wrong or that can go right. But La Rue was charming and level-headed and that voice of wisdom that Yonie lacked from pretty much every other adult in this book. Sometimes I wish La Rue was a little bit more sassy, because I always picture my cats as super sass-masters, but she was still a standout. Sadly, Yonie did not always strike all the same chords with me. She relied on others to make her own decisions a lot (particularly La Rue) and without advice, she made some really brash, really dumb decisions that had me burning from secondhand embarrassment. I truly grew to love her at the end of the book, when she puts her foot down with a love interest (that scene made me laugh so hard) and finds a way to make her own dreams come true.

I think some people will rate this book high and some will give it more modest ratings like myself — it’s truly based on taste. I’m settling on three stars primarily because the actual plot of the book doesn’t emerge (and stay prominent) until the mid-point of the book. Until then, it feels like a collection of mini-mysteries surrounding guile objects … which were interesting, but did puzzle me, especially since it left the ending a bit rushed.

How do you feel about mini-adventure based stories? Should a book be one coherent plot or several mini plots tied together? Let’s discuss!