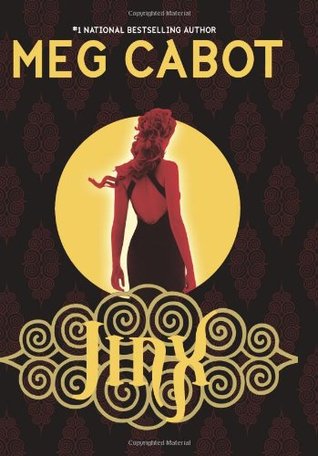 Jean Honeychurch hates her boring name (not Jean Marie, or Jeanette, just . . . Jean). What’s worse? Her all-too-appropriate nickname, Jinx. Misfortune seems to follow her everywhere she goes—even to New York City, where Jinx has moved to get away from the huge mess she caused in her small hometown. Her aunt and uncle welcome her to their Manhattan town house, but her beautiful cousin Tory isn’t so thrilled. . . .

In fact, Tory is hiding a dangerous secret—one that could put them all in danger. Soon Jinx realizes it isn’t just bad luck she’s been running from . . . and that the curse she has lived under since the day she was born may be the only thing that can save her life.

Jack, the Pumpkin King: A book where a character has skeletons.

Jinx is my third selection for BPR’s Halloween Read-a-thon: Nightmare Before Book Princess Reviews. I could remember that my first reading of this book left me wide-eyed and speech left when naive and sweet Jean Honeychurch unveiled the skeleton in her closet … when all along the book focused on the misdeeds of her cousin, Tory.

In Jinx, Jean arrives in New York to spend the last month of school with her aunt, uncle, and three cousins. She admits it’s weird to leave her home with only a month of school to go, but apparently something happened that forced her to get out of town as fast (and as far) as possible. This tidbit of information is dangled in front of readers every once and a while until it explodes at the climax of the book (when you think you have it figured out). Am I saying this book makes Jean’s departure a big mystery? No. This book is not a mystery, so don’t be confused going in. What DOES happen is you’ll get shivers up your spine when you get the specifics on what you thought was just a *minor incident*.

But the book doesn’t focus on Jean’s skeletons (at least not right away). In fact, Jean’s past lives on the back-burner for a lot of the book. Instead, we look at her new life in New York — mainly, at her cousin Tory, a mischievous girl who swears vengeance on anyone who opposes her.

Tory and Jean’s dynamic is fascinating if sometimes unbelievable. Tory is on the extreme end of “calculating-and-cold” and Jean sits neatly on “innocent-and-naive.” I would complain, if not for the fact that 1) their personalities are explained and 2) their personalities are enjoyable within the construct of the novel. To explain number one, we learn throughout the novel (from various characters) that a lot of Jean and Tory’s personalities are influenced by their upbringing (Jean is the daughter of a pastor and lives in a small town, Tory is affluent and gets whatever she wants). Also, when the girls were young, they learned a story (I will not say what for the sake of spoilers) from their grandmother that changed how they viewed themselves in relation to the world. Tory believed herself greater than. Jean worried the harm she could bring. As for number two, because of their defined personalities, the two girls are often put in conflict — which moves the plot forwards and gives the story its kick.

Not long after arriving in New York, Jean meets her LI (love interest) for the book. While she makes comments typical of an insta-love relationship (how she can’t look away because he’s so attractive, for example) they instead progress into a steady friendship for the majority of the book. This was super enjoyable if sometimes tiring to read because the LI was clearly stating “I LIKE YOU” and Jean was like “LOL WOULDN’T IT BE FUNNY IF HE LIKED ME” at several points. But a guy who respects your space until you’re ready? Hey, that’s cool.

I can see this being a book where someone will rate low because, as mentioned, the characters can get extreme at times (Tory is severely intense about her dislike for Jean, which drives a lot of the plot, and if you don’t buy her motivation, this book will crash and burn for you). But I liked the interactions, accepted how naive Jean could be, and rolled with many of the punches in this book.

Three and a half crowns bumped to four because I enjoyed this book BUT I need to be fair to the implausibilities/extremes I recognized.

Can a character’s actions always be explained by their past? Or is it sometimes just poor characterization? Let’s discuss!

7 thoughts on ““Jinx” by Meg Cabot ✏ When Does Bad Luck Turn into Dark Magic?”