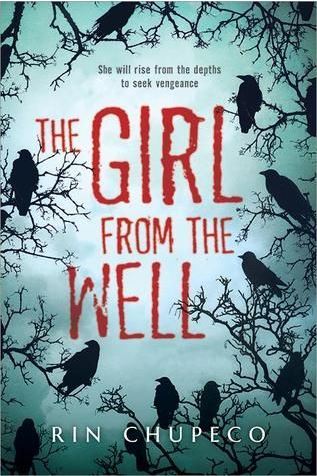 Okiku wants vengeance and she gets it. Whenever theres a monster hurting a childthe same way she was hurt three hundred years ago in Japanher spirit is there to deliver punishment. But one American boy draws her like no other. The two are pulled into a world of eerie doll rituals and dark Shinto exorcisms that will take them from the American Midwest to the remote valleys and shrines of Aomori, Japan. The boy is not a monster, but something evil writhes beneath his skin, trapped by a series of intricate tattoos. Can Okiku protect him? Or is her presence only bringing more harm?

This wasn’t quite the horror story that I wanted, but it was pretty close. Basically, if there was ever a YA horror movie that was being made, I would 200% push forward this one, because I think it was easily one of the best books I could visualize and could see being a horror movie so well.

You know how my usual reviews just ramble on for ages and ages with paragraphs getting progressively larger? Well, I’m trying something new, since I read this audiobook a few days ago and while I was at work, so I’m not sure I am in the best mind frame to write my classic and probably very unneeded large paragraphs. Be prepared for, like, some very large bullet points.

Let’s discuss some pros:
– The cultural aspects. I don’t think I’ve ever read a ghostie book that blended the culture as well as this one. You learn more about the supernatural Japanese culture as well as regular Japanese culture in this book, and I loved everything about it. I’m totally obsessed with everything folklore – especially of the paranormal variety – and this was IT.
– It has some great horror moments. I mean, there was nothing really jump scares or anything that made me afraid to go to bed at night or anything, but I really felt like it was YA horror with some gore and moments that could have been frightening that was what I needed from the book.
– The book is told from a kind of third person POV. The story is told from the ghost, Okiku, and at first, it felt very detached, but I think it kind of worked to bring a more general creepiness to the story. I felt it worked well.
– I liked the characters for the most part. I think Callie, Tark, and Okiku were all interesting and complex in their own right. I really liked them, and I felt like they were a fantastic cast to make it through this story. Also, they didn’t do crazy things just for the sake of being in a horror movie. I never had to shout, NO, DON’T GO IN THERE. WHY ARE YOU GOING IN THERE???
– The pacing was good, and I thought interesting twists and turns made it an intriguing story that went by pretty well.

And let’s discuss some cons:
– Format. As I said, I read this as an audiobook, and I’m not sure how it translated the format super well. There is a thing about counting in this book that I think was supposed to make it creepy and scary, but it was quite jarring in the audiobook. There would be some prose happening and then all of a sudden 8! or 4! and I’m like, wait, what? I’m not sure how it was in the actual book, though, and I’m not sure I would have been a fan in there.
– I, um, was never really scared.
– There was still some quite detachment with the narrator.
– While I liked the characters, I never really loved any of them.
– The ending got a little wobbly for me, and I kind of checked out at the end when the whole battle royale was going down and such.

Overall, this was a pretty solid read. It honestly went up in my mind the more that I talked about it, and I think it might be something to add to your TBRs for sure if you’re looking for the spooky reading months coming up! It was an intriguing and thrilling, but it never got scary. It does have some horror/gory moments, though, but it really fit with your basic horror movie. It did bring some amazing moments with the Japanese folklore included. 3.5 crowns and a Jasmine rating.

Also, never doing bullet points again. It was too weird for me, I failed, and I can’t deal.

What do you think? Do you read YA horror? Would a weird amount of counting throw you off in a book? Aren’t bullet points not as much fun as you thought it would be in a review?? Let’s discuss in the comments below!

16 thoughts on “The Girl from the Well by Rin Chupeco”