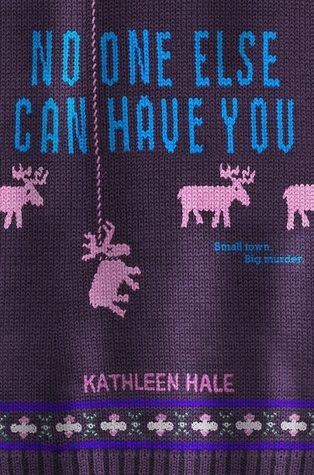 Title: No One Else Can Have You
Author: Kathleen Hale
Pages: 380

Small towns are nothing if not friendly. Friendship, Wisconsin (population: 689 688) is no different. Around here, everyone wears a smile. And no one ever locks their doors. Until, that is, high school sweetheart Ruth Fried is found murdered. Strung up like a scarecrow in the middle of a cornfield.

Unfortunately, Friendship’s police are more adept at looking for lost pets than catching killers. So Ruth’s best friend, Kippy Bushman, armed with only her tenacious Midwestern spirit and Ruth’s secret diary (which Ruth’s mother had asked her to read in order to redact any, you know, sex parts), sets out to find the murderer. But in a quiet town like Friendship—where no one is a suspect—anyone could be the killer.

I know many of you are sitting and staring at my book choice for this week, thinking, “WHY would you pick up this book, Sha? WHY?” (For those of you who don’t know, I suggest you read this post, the most unbiased and informational I could find.) But you have to know that first, I bought this book without knowing anything about the author and second, I adored this book on my first read (while still remaining in the dark about the author), and third, when I finally went on Goodreads to see if people agreed with my opinions on the book, I found out the author’s history and was like, “Huh.”

Yup. Now I want you — plead with you — to read this review with a blank slate and then carefully consider my question, “Should a book be judged for its author’s actions?” Or is literature independent of its creator? AND THIS QUESTION goes beyond the YA mystery/thriller that is No One Else Can Have You: what about celebrated works written by the elite caste in the 1800s who did nothing for the struggling peasantry? Books written by racists or misogynists? I’ll leave you to ponder … and begin this review.

I finished No One Else Can Have You at a loss for words. How to describe a book that you simultaneously enjoy but want to bury in your shelves so deep, you never need to look at it again? The answer came to me in forms of a review on the back: “Will make readers both cringe and chuckle,” via Publishers Weekly. Trust me, I cringed in this book, and not for flattering reasons.

The characters in this book were not strong. In my opinion, they are great for a laugh and provided persist comic relief. And trust, I was laughing. However, when a book’s entire cast is there for humour (and you’re dropping a mystery/thriller book), there’s a problem. Kippy is sixteen years old and wears a utility belt for her notebook, has an obsession with wearing knit sweaters, stuffed her old cat, and was treated in her youth for an ongoing problem with obsessive hugging. She’s just *so* overly quirky that she becomes unrelatable and just odd. What sixteen-year-old is like this? It can be funny to read passages about these quirks, but other times it’s like, “Okay, haha, another knit sweater moment, now how about she gets serious for a second?”

Kippy’s father was SO ANNOYING. I knew what was coming, because this book is a re-read for me. Even so, the way he hovers over her constantly had me gritting my teeth. She’s sixteen and she isn’t allowed to visit her dead best friend’s brother to grieve??? Her father automatically is like, “Duh, it’s a boy, it’s sexual so you can’t be near him.” WTF. Also he called her a bunch of weird “pet names” like Pimple, Chocolate Butt, etc., and always knew what was best for her. His opinion was be all end all in her life. DUDE. Give her some space. Not to mention he’s a psychologist and literally over-diagnoses Kippy. She doesn’t cry after a death and the dad is like, “OMG I think you need some antidepressants.”

The book does introduce a relationship: Kippy starts up with Davey, Ruth’s older brother. I’ll just say this: that was the flatest relationship I have ever read. When they kissed I was basically like, “Oh. Okay, then.”

I’m not sure what moved me to love this book so much the first time. I didn’t hate this book during this read, though. I mean, oof, a lot of moments displeased me. But the adventure aspect of the book was there and it was indeed really humourous. Hale nailed it with Kippy’s quirky personality (I just felt it over the top). I felt like the book was a wild ride up until the end. So yes, an interesting story. But with notable issues.

Another thing I will drop, and not explain much because I would end up with a novella: mental illness in this book? Not super comfortable with how that was depicted. Was it shown poorly, not necessarily, but the decisions the father made on Kippy’s behalf … that just really got to me. Especially since there was no clear remorse?

Lastly: the actual mystery. Did not see the villain coming. The way Kippy cracked the case was ridiculous (not funny, ridiculous as in okay, well then). She basically stumbled on the answer AND the way she equated it in her head was so … elementary. BUT the villain did make sense … if it had not all just jumped out at the end, it would have been cleaner writing, is all.

Three crowns because the book is an enjoyable read until you actually pause and go, Wait a second… So if you don’t plan on thinking while reading, yeah, this is a good one. Wow, that sounds bad. I hope you know what I mean? If you’re going for a relaxed, just read for enjoyment and not to analyze the meaning of life kind of thing.

NOW, what genre should I read for next week? Vote in the comments below!

Does an author’s reputation define a book? Or can a book stand for its own plot/writing/characters? Let’s discuss!

5 thoughts on “Chooseday Tuesday: Kathleen Hale “No One Else Can Have You””