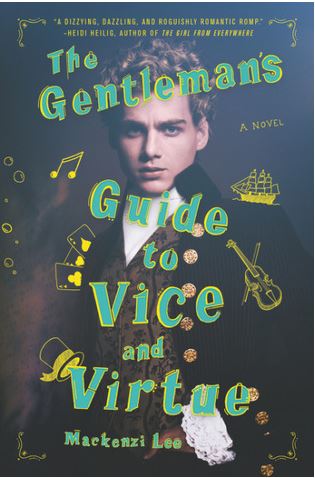 A young bisexual British lord embarks on an unforgettable Grand Tour of Europe with his best friend/secret crush. An 18th-century romantic adventure for the modern age written by This Monstrous Thing author Mackenzi Lee—Simon vs. the Homo Sapiens Agenda meets the 1700s.

Henry “Monty” Montague doesn’t care that his roguish passions are far from suitable for the gentleman he was born to be. But as Monty embarks on his grand tour of Europe, his quests for pleasure and vice are in danger of coming to an end. Not only does his father expect him to take over the family’s estate upon his return, but Monty is also nursing an impossible crush on his best friend and traveling companion, Percy.

So Monty vows to make this yearlong escapade one last hedonistic hurrah and flirt with Percy from Paris to Rome. But when one of Monty’s reckless decisions turns their trip abroad into a harrowing manhunt, it calls into question everything he knows, including his relationship with the boy he adores.

Witty, dazzling, and intriguing at every turn, The Gentleman’s Guide to Vice and Virtue is an irresistible romp that explores the undeniably fine lines between friendship and love.

This book was adorable and fun and full of so many shippable (and just straight up ship) moments. I don’t think I’ve ever connected with a ship as fast as I did with Monty and Percy, and this was just a fun, entertaining read that goes on a wild ride.

Lee definitely makes a name for her with her writing right off the bat. We’re introduced to fun characters, interesting plots, and just plain interesting writing from the get-go. Even before the first part of the audiobook had finished, I already knew this was easily going to be a four or five crown book. Lee just has a fantastic ease and lightness to her writing that makes everything seem so interesting and just eagerly fun (I don’t think that’s even a thing but shhhhh let’s just go with it).

The characters were lovable as well. Okay, Monty took a longgggggggggg time for his redemption arc, and I did get frustrated by him a LOT, but I still feel like he had a good heart to him. I always did want to root for him…although I rooted for my darling love, Percy. OMIGOSH, I LOVE ME SOME PERCY. He’s just so much love, and I can’t get over all the feels and love that I have for him. Him and his fiddle have my book heart. Felicity was great as well, and her determination, wit, and strength were fantastic. Can’t wait to see where her book takes us. All of the other side characters that popped up were truly fun and great additions as well.

The shipppppppppppppppppp. Okay, the moment we met these two, I was solddddd. They were just so cute and adorable and the feeeeeeeeeeeeeeeels. I just wanted to smush them together and have them call it a day at Happily Ever Land. Maybe Percy did deserve a little bit better because Monty did cause him a lot of heartbreak, but they just both learned and loved together in such a wonderfully adorable, lovable way. JUST FEELS. AND MORE FEELS. AND LOTS OF FEELS.

The plot was super interesting as well. I had no clue where it was going but it still delivered some unique and cool moments. I liked where we swerved in different parts, and it definitely took a different direction than what I originally thought we were going. However, I did feel like it was a little too drawn out. Each time I thought the story should be ending, we ended up somewhere else with something else going on. I honestly felt like some things could have been cut to make it a bit more concise and not having me thinking it was going to end at like five different parts.

Overall, this was such a fun, cool adventure. Not only was I forever entertained but I found just one of the cutest ships in YA history. I loved the characters and the transformations that they took. I did have a few gripes with it, but overall, it provided a lot of entertainment and feels. 4 crowns and an Ariel rating!

What do you think? What are some of your favorite ships in YA history? Do you ever keep using the same words over and over and over in the same review because apparently things are just really FUN? Let’s discuss in the comments below!