Sometimes, words just escape me. I know, right? The girl that goes on and on and on in reviews? Somehow, it happens, and I don’t entirely know why. I’ve collected yet again 3 reviews where words were not my jam, but I sort of tried????

The modern classic Speak is now a graphic novel.

“Speak up for yourself-we want to know what you have to say.”

From the first moment of her freshman year at Merryweather High, Melinda knows this is a big fat lie, part of the nonsense of high school. She is friendless–an outcast–because she busted an end-of-summer party by calling the cops, so now nobody will talk to her, let alone listen to her. Through her work on an art project, she is finally able to face what really happened that night: She was raped by an upperclassman, a guy who still attends Merryweather and is still a threat to her.

Trigger Warnings: rape, cutting, brief mention of an eating disorder, and severe depression (all of these are very intensely shown)

And now I’m over here BAWLING. My heart hurts so badly. Wow, this was a powerful novel. I honestly don’t even have any words that can do justice to this novel, the message that it sends, and how deeply moving it is. My emotions feel as if they have been churned into a blender, and I can’t even figure out how to put them back together again.

The only issue that I had was the format at first. It’s little snippets, so I got a little lost at first with how it was cutting in and out every few pages. I’m not sure if this is how it is in the original novel as well? It just gave me a little whiplash. However, once you get used to it, it’s totally fine and works out very well.

I haven’t read the original book, so I sadly can’t say how accurately it is to the original.

I wouldn’t recommend this to everyone since it has some deeply dark content. However, it was a masterpiece of a novel that is one of the best emotional reads that I’ve ever read. There is no questioning the book’s classic level with the way that Anderson delves into physical, psychological mental, and emotional trauma after a rape. The art in this novel was chilling yet so beautiful. I honestly can’t even do this book justice with words, so I will just leave with this: 4.5 crowns and an Anna rating. 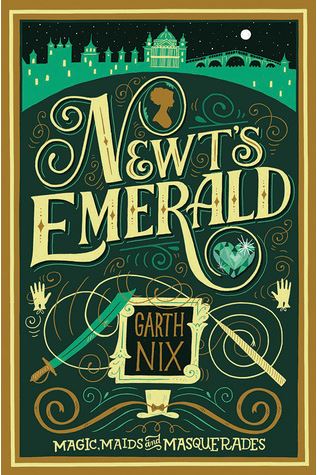 On her eighteenth birthday, Lady Truthful, nicknamed “Newt,” will inherit her family’s treasure: the Newington Emerald. A dazzling heart-shaped gem, the Emerald also bestows its wearer with magical powers.

When the Emerald disappears one stormy night, Newt sets off to recover it. Her plan entails dressing up as a man, mustache included, as no well-bred young lady should be seen out and about on her own. While in disguise, Newt encounters the handsome but shrewd Major Harnett, who volunteers to help find the missing Emerald under the assumption that she is a man. Once she and her unsuspecting ally are caught up in a dangerous adventure that includes an evil sorceress, Newt realizes that something else is afoot: the beating of her heart.

In Newt’s Emerald, the bestselling author of Sabriel, Garth Nix, takes a waggish approach to the forever popular Regency romance and presents a charmed world where everyone has something to hide.

I don’t it’s a good thing when you literally can’t come up with more than a sentence to say about a book. Usually, I’m the girl that can’t stop talking about a book and end up putting the people that read my reviews through these long drawn out things. However, this book was just quite unmemorable and boring. I mean, it was campy and fun, but I just didn’t connect with anything and I was just so ridiculously bored. I just can’t find the words to explain anything more about it but it did have some fun, kooky moments that did get me through.

2 crowns and a Cinderella rating!

Empress of a Thousand Skies 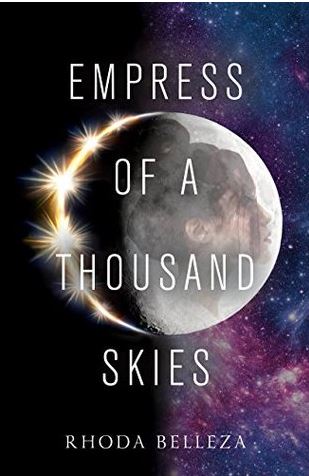 The only surviving heir to an ancient Kalusian dynasty, Rheehas spent her life training to destroy the people who killed her family. Now, on the eve of her coronation, the time has finally come for Rhee to claim her throne – and her revenge.

Alyosha is a Wraetan who has risen above his war refugee origins to find fame as the dashing star of a DroneVision show. Despite his popularity, Aly struggles with anti-Wraetan prejudices and the pressure of being perfect in the public eye.

Their paths collide with one brutal act of violence: Rhee is attacked, barely escaping with her life. Aly is blamed for her presumed murder.

The princess and her accused killer are forced to go into hiding – even as a war between planets is waged in Rhee’s name. But soon, Rhee and Aly discover that the assassination attempt is just one part of a sinister plot. Bound together by an evil that only they can stop, the two fugitives must join forces to save the galaxy.

I really tried with this book, but it just failed so hard to keep my attention. If I already wanted to start skimming in the first chapter, I’m going to take that as a sign that I should probably just give up earlier rather than later. There was some confusion, there was some annoyance, there was some odd things going on with me feeling nothing about the book other than wanting to read something other than this.

No crowns because I DNF’d and a Snow White rating!

What do you think? Did you read any of these? What were your thoughts? Does sometimes your brain not work for reviews? Let’s discuss in the comments below!