Of course I want to be like them. They’re beautiful as blades forged in some divine fire. They will live forever.

And Cardan is even more beautiful than the rest. I hate him more than all the others. I hate him so much that sometimes when I look at him, I can hardly breathe.

Jude was seven years old when her parents were murdered and she and her two sisters were stolen away to live in the treacherous High Court of Faerie. Ten years later, Jude wants nothing more than to belong there, despite her mortality. But many of the fey despise humans. Especially Prince Cardan, the youngest and wickedest son of the High King.

To win a place at the Court, she must defy him–and face the consequences.

In doing so, she becomes embroiled in palace intrigues and deceptions, discovering her own capacity for bloodshed. But as civil war threatens to drown the Courts of Faerie in violence, Jude will need to risk her life in a dangerous alliance to save her sisters, and Faerie itself.

I tried with this one more than I usually did because there really wasn’t anything wrong with it – I just could not connect to it at all. I just felt bored and annoyed with it – maybe I placed too high expectations on it? I just didn’t like the characters, the fact that it was taking too long to get anywhere, and just the feel of the story. However, that being said, it does feel like a well done faerie novel and it does seem dark and twisty. As I said, nothing was really wrong with it at all – I just don’t think it was a Mandy book.

No crowns since it’s a DNF and a Snow White rating! 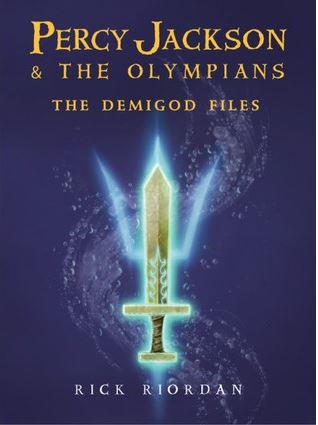 Young demigods, brace yourselves for a peak inside the highly classified Demigod Files! Compiled by Camp Half-Blood s senior scribe, Rick Riordan, these top secret archives include three of Percy Jackson s most perilous adventures and behind-the-scenes interviews with your favorite characters–Connor and Travis, Clarisse, Annabeth, Grover, and Percy. Become an authority on Percy s world with this must-have guide to the Percy Jackson and the Olympians series.

I needed a little book to read in the background while I was working, and while this was good background noise, I’m not sure how exciting it was as a read. It had some interesting parts, but the parts that I did enjoy, there were shorter than I wanted and the parts that I wanted shorter, were way too long.

I liked the interviews, and there were a few good little quirky comments that were fantastic in there. I liked a few different things, but some of the stories were just okay. The narrator kind of made my eyebrows raise at a few of them because I feel like every man that wasn’t Percy or Grover had a dude bro voice and it was kind of odd. And his version of Annabeth was kind of annoying. But the stories themselves were just okay and not super epic Percy fun. They seemed a little too rushed, but I mean, they are just short stories.

Overall, it was fun enough, and you still should read it to complete your Demigod collection since it definitely provided me more insight into Charlie, Selena, and Clarisse, but it really isn’t as fun as it could have been. 2.5 crowns and a Pocahontas rating!

The Son of Neptune Graphic Novel

Percy is confused. When he awoke after his long sleep, he didn’t know much more than his name. His brain-fuzz is lingering, even after the wolf Lupa told him he is a demigod and trained him to fight. Somehow Percy manages to make it to the camp for half-bloods, despite the fact that he had to continually kill monsters that, annoyingly, would not stay dead. But the camp doesn’t ring any bells with him.

Hazel is supposed to be dead. When she lived before, she didn’t do a very good job of it. When the Voice took over her mother and commanded Hazel to use her “gift” for an evil purpose, Hazel couldn’t say no. Now, because of her mistake, the future of the world is at risk.

Frank is a klutz. His grandmother claims he is descended from ancient heroes and can be anything he wants to be, but he doesn’t see it. He doesn’t even know who his father is. He keeps hoping Apollo will claim him, because the only thing he is good at is archery-although not good enough to help the Fifth Cohort win at war games. His big and bulky physique makes him feel like a clumsy ox, especially in front of Hazel, his closest friend at camp. He trusts her completely-enough, even, to share the secret he holds close to his heart.
Featuring a faithful adaptation by Robert Venditti, and incredible artwork by Antoine Dod and Orpheus Collar, Rick Riordan’s blockbuster book comes to life in The Son of Neptune, The Graphic Novel.

Okay, not as bad as the other graphic novels for Percy Jackson. Some of the images and characters were still quite a bit strange and not what I had in mine, but overall, I thought this was such a solid improvement in art. I actually really liked it most of the time.

I thought the story was very well done, too. They kept a lot of the important parts, but they did take a few things out that I did love (especially concerning the ending). However, it was a good rendition of the novel, and it kept moving along wonderfully.

Also, I see what you did there with the stuffed animals, Disney, and I wholeheartedly approve. Love it.

Four crowns and an Ariel rating, because what else could I do for the son of Neptune?

What do you think? Have you read any of these? What did you think of them? Let’s discuss in the comments below!