I’m so excited to bring you today an interview with Jamie Questell! Her new book, By a Charm and a Curse will be out in the first week of February, and I have to say that it’s one of the most intriguing concepts that I’ve seen for 2018 so far. If you’re into carnivals and old school magic curses, this one is definitely for you. Let’s get to the interview!

Le Grand’s Carnival Fantastic isn’t like other traveling circuses. It’s bound by a charm, held together by a centuries-old curse, that protects its members from ever growing older or getting hurt. Emmaline King is drawn to the circus like a moth to a flame…and unwittingly recruited into its folds by a mysterious teen boy whose kiss is as cold as ice.

Forced to travel through Texas as the new Girl in the Box, Emmaline is completely trapped. Breaking the curse seems like her only chance at freedom, but with no curse, there’s no charm, either—dooming everyone who calls the Carnival Fantastic home. Including the boy she’s afraid she’s falling for.

Everything—including his life—could end with just one kiss.

Your book is set in the illustrious Le Grand’s Carnival Fantastic – a traveling carnival with some magical intrigue surrounding it. The carnival setting is one of the coolest settings for me. What inspired you to write about a carnival – and have you ever been to a really cool one?

It could be the nostalgia talking, but when I was growing up, the school I went to always held a gigantic Halloween carnival. It was so big that classes were always cancelled the following day so the grounds could be cleaned up. They turned this small building where we had music classes into a haunted house, there were midway games set up on the outdoor basketball court, and carnival food everywhere. When I was a kid, going to that carnival was better than trick or treating.

Your story was once blurbed as Snow White meets Pinocchio – two very interesting Disney movies. I have to ask, were either of them inspirations? And since this is who Book Princess Reviews, do you have a favorite Disney character and why?

I can completely see why that blurb stuck around for a while, but in my mind, the whole set up is a little bit closer to Beauty and the Beast. We have Emma, who doesn’t know how good she has it until she lose it all and Ben, who has to look past the rough exterior to the heart beneath. The big difference though, is that instead of being cursed alongside Emma the carnival performers and workers are actually charmed, and benefit from her suffering.

And choosing a favorite Disney character was way harder than I thought it would be! But I think that I have to go with Anna from Frozen, mostly because I relate to her bedhead.

You have two very interesting protagonists on your hands – our Girl in the Box, Emma, and a carnival worker dreaming of more, Benjamin. Was one of their voices more fun to write?

I love both Emma and Ben, but honestly, the most fun voice to write was Whiskey, one of the carnival performers. My goal was to come up with the most off the wall things for her to say, and she has one of my favorite lines in the whole book.

Also, since the Girl in the Box has some comparisons to marionettes/puppets/dolls/etc., what are your opinions of them? Do they creep you out (because they’re all really Chucky and Annabelle in waiting) or do you find them to be quite cool and beautiful? No pressure here XD

Ha! Mostly I think they’re creepy in a cool way. Like, I love the look of them, and the craftsmanship. I’ve seen some vintage marionettes that are really gorgeous. But would I want to have a collection in my home? HARD PASS.

If you were stuck in the Le Grand Carnival Fantastic, where would you most likely be working? What would be your dream job in the carnival?

I think my dream job would be something that involved a sparkly costume. But in reality? I am really uncoordinated. So I think I’d probably wind up in one of the booths selling deep-fried treats. In fact, I wrote a brief (like seriously, one sentence) appearance by two women with retro hairdos who walk by Ben and I figured that would be me and my bestie.

It said in your author biography that you have been “a book seller (fair warning: book lovers who become book sellers will give half their paychecks right back to their employers), a professional knitter, a semi-professional baker, and now works as a graphic designer in addition to writing”? Besides writing, which job was the most fun? And what is your favorite thing to bake (because baking is the bestttttttttt)?

Ooh, that’s tough! There were/are perks and downsides to all jobs, but I absolutely love baking. Making a cake from nothing feels like magic, and I’m always trying to learn new techniques. And without a doubt, cakes are my favorite thing to bake. I love a rich chocolate cake with cookies and cream filling. Perfection! 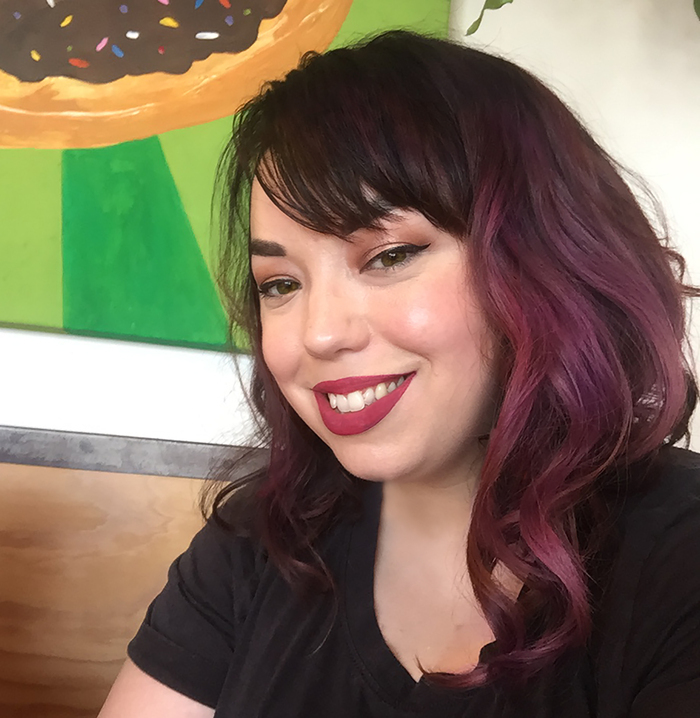 JAIME QUESTELL grew up in Houston, Texas, where she escaped the heat and humidity by diving into stacks of Baby Sitter’s Club and Sweet Valley High books. She has been a book seller (fair warning: book lovers who become book sellers will give half their paychecks right back to their employers), a professional knitter, a semi-professional baker, and now works as a graphic designer in addition to writing. Currently, she lives in the suburbs with her family, one derpy dog, and one imperious cat. If she had her way, she’d have an army of corgis, like the Queen of England.

What do you think? How cool does this book sound? Let’s discuss in the comments below!

10 thoughts on “Interview with Jamie Questell, author of By a Charm & a Curse!”