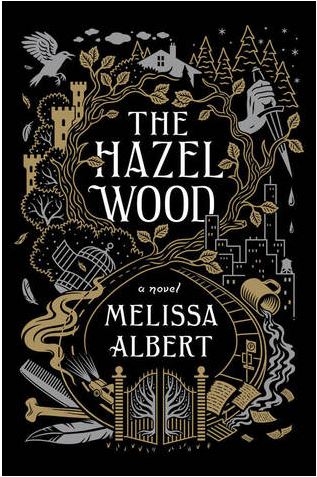 Seventeen-year-old Alice and her mother have spent most of Alice’s life on the road, always a step ahead of the uncanny bad luck biting at their heels. But when Alice’s grandmother, the reclusive author of a cult-classic book of pitch-dark fairy tales, dies alone on her estate, the Hazel Wood, Alice learns how bad her luck can really get: Her mother is stolen away―by a figure who claims to come from the Hinterland, the cruel supernatural world where her grandmother’s stories are set. Alice’s only lead is the message her mother left behind: “Stay away from the Hazel Wood.”

Alice has long steered clear of her grandmother’s cultish fans. But now she has no choice but to ally with classmate Ellery Finch, a Hinterland superfan who may have his own reasons for wanting to help her. To retrieve her mother, Alice must venture first to the Hazel Wood, then into the world where her grandmother’s tales began―and where she might find out how her own story went so wrong.

*Thanks so much for the publisher for sending me over a copy!!*

I’m not sure what I even read was real or not? Like, it seemed kind of real at the time that I was reading it, but now that I’m finished, I don’t know. Maybe it was a fairytale?

This story was great until it just got to be…not enough if that makes any sense. Albert does a wonderful job at creating a lush, spooky atmosphere. The stories are chilling. The characters are dark and mysterious. Everything had me guessing. Literally, if asked me what I would give the concept, the atmosphere, the writing, and the mood, it would easily be five crowns, for sure.

The issues come to be with a few different things. The first item is the characters. I didn’t like any of them. Honestly, Ella was the most intriguing of them to me, and I mean, she wasn’t nearly any of the main characters. I kept forgetting Alice’s name, and I didn’t like her from the start. The truth is – any of these characters could have been substituted and I would never have known. The atmosphere and concept was the shining star here, and Alice, Finch, and the rest of them were forgettable and interchangeable. I don’t even know what to do with Finch either.

The second issue was the plot. I tried to follow the linear path, but I just kept getting a bit confused. I would think we were going somewhere, and then it just seemed like there was a big distraction with a spooky story or something and then I don’t know what we did. I can’t even explain to you the plot. All I got was Hinterland. Literally, I feel like that was the excuse and plot for anything.

And to speak more about it, I’m still confused on Hinterland. Is it a place? A world within a world? I DON’T KNOW. Whenever anything happened that was odd, one of the main characters would go, Hinterland, and the other would be like, oh, kk, and then they would go about their merry way. I still don’t even get it??

To tell the truth, I stopped reading at about 73% of the story. I mean, I was skimming starting at 50% but I couldn’t sum up the energy to go through all the rest of it. I mean, I read the ending and such, but I kept looking at the rest of the story going, but I really don’t care??? This to me reminded me a bit of this old Disney Channel movie, Don’t Look Under the Bed. It was so creepy and suspenseful for the longest time and once you get the climax and enter under the bed land, it just gets weird and you’re on some weird acid trip you didn’t sign up for and don’t want to be on and don’t even get? That’s the ending of this story and I just gave up on it.

If Albert was to come out with a book on just her spooky stories or using this same setting with more complex characters, this would easily be a five crown read. She really created such a wonderfully dark, brilliantly creepy world, and I would love to dive deeper into it. She has so much potential, and I’ll definitely keep an eye out for her other works. Two crowns and a Cinderella rating!

14 thoughts on “The Hazel Wood by Melissa Albert (ARC Review)”