I’m so excited to bring to you today a special deleted scene from the new book, Here Skies Surround Us! This book sounds so interesting, and the covers for these books are so cool! Those backgrounds for themmmmmmmmmm. Let’s check it out and stay tuned for the giveaway at the end (and it’s internationallllllllll)! 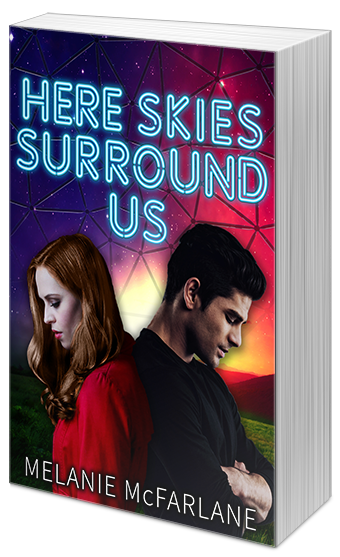 Nat leaves her home, Dome 168, just as they begin to colonize on the outside. She travels with Evan to his home, Dome 569, to deliver a replica of the immune serum and allow Evan to report back to his mother, Caroline. But when they arrive, members of the “New Order” take them into custody and Nat and Evan are separated, once again.

Thankfully she is reunited with her uncle, Alec, who takes Nat under his protection. But Nat has a lot to learn about Evan’s home, a progressive dome that colonized on the outside over a decade ago. There are many rules in Dome 569 put in place by Caroline; some that come with sharp and sometimes deadly consequences when broken. Here, Nat learns of the struggles that can come with change, and how tearing down the old ways doesn’t always make things better overall. In the process, she uncovers truths that could tear down the kingdom Caroline has sacrificed to protect, and in turn puts Nat at risk.

Will Nat be able to protect Evan from the lies, or will he succumb to them for the sake of his family, just as his mother did many years before? As Nat uncovers the secrets of Dome 569, will she be willing to give up her morals and values to pay the price for freedom, or die fighting for what she believes in?

The summer before I turned seven was when people started disappearing. I remember that summer; it was hot. The kids in our district spent most their days down at the pond in an attempt for reprieve from the heat. That was when I first saw Jaden, but I didn’t learn his name until after he went missing.

Near the end of that summer I grew deathly ill. My mother kept me indoors and wouldn’t let anyone visit. I remember lying in my bed, having fever-induced hallucinations, but no matter how much my father fought my mother, she refused to let a doctor see me.

When I finally got better, school had already started. I forgot about the blonde haired boy from the pond and caught up on my classes. Within the first week posters started popping up in our district. There he was, the blonde-haired, brown-eyed boy from the pond. “Missing” was scrawled across the top of posters. Under his picture it read “Jaden”.

I didn’t know at the time that it was related to the pond. Jaden and I were the only two who got sick that day. His mother had dutifully taken him to the hospital for treatment, which he recovered from. It was after he returned home that he disappeared from his bed that night.

My mother, through a long-time friendship with Waldorf, a microbiologist, had learned that then pond had been tainted. Inside it laid a hidden threat, lurking in the deep, put there by those in charge to weaken our immune systems so they could see who was most susceptible to a virus they were grooming for a comeback.

Generations ago, when my mother’s great-grandmother was a girl, this same virus broke out across the world. Those infected turned into horrible monsters, attacking even those they loved. Those immune were placed into domed cities. There they were protected as the world was bombarded with nuclear bombs to wipe out the virus and any who could carry it.

Our dome was policed by the Order. They found out that the immune gene was not genetic. They used this to their advantage and began testing out remnants of the virus on innocent people, covering up their disappearances. Those poor souls were taken underground and turned into monsters so the scientists could develop an immune serum.

After Jaden disappeared, my parent’s main concern was to find a way to get me out of the dome. My falling ill told them that I was not immune to the virus. My mother had uncovered the Order’s secrets and learned about their testing. She was about to expose them to the people of our dome. Before she could they released an infected on her and her science team, who were trying to find a safe place for colonization. The Order covered it up for nearly a decade as radiation poisoning.

My uncle was on that same science team. He was the sole survivor, and escaped to a nearby dome. That’s where he met Evan and his mother, Caroline. They agreed to help him get back into his dome and bring down those responsible. That’s when I met Evan.

Evan was captured and brought into our dome. We met up and he began to watch over me while plotting to overthrow the Director. Somewhere in the middle of all of that I fell for him. He was the opposite of anything I’d ever known. He was a rebel.

When we finally brought down the Director and opened the doors to the dome for people to flee things got a little messy. We knew it wouldn’t be easy. But the people won in the end and made their way to the clean, crisp air of the outside.

Melanie McFarlane is a passionate writer of other-wordly adventures, a little excitable, and a little quirky. Whether it’s uncovering the corruption of the future, or traveling to other worlds to save the universe, she jumps in with both hands on her keyboard. Though she can be found obsessing over zombies and orcs from time to time, Melanie has focused her powers on her YA debut There Once Were Stars, and her YA urban fantasy Summoner Rising.

She lives with her husband and two daughters in the Land of Living Skies.

Other Books in the Series 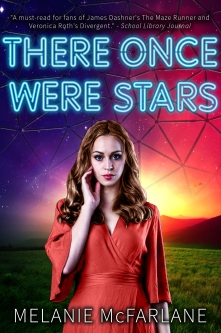 What do you think? Doesn’t that deleted scene sound so intriguing? What are some interesting sci-fi books you’ve investigated recently? Let’s discuss in the comments below!